Bandsman Tricks Marines At Barracks Into Standing At Attention

Evening colors is a timeless military tradition, and it’s one that every service member knows. When Taps plays, everyone outdoors... 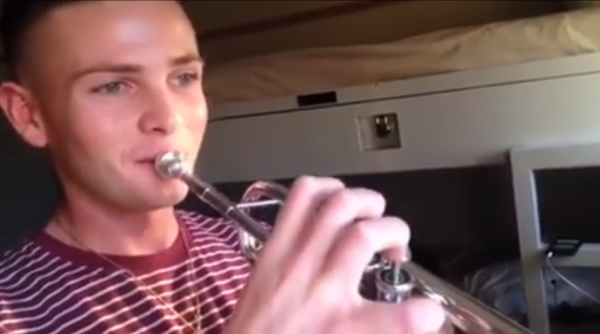 Evening colors is a timeless military tradition, and it’s one that every service member knows. When Taps plays, everyone outdoors must face the flag and stand at attention, and those in uniform must salute. While traditions are a source of pride for many in the service, let’s be honest, they’re also an occasional cause for frustration.

Especially when someone tricks you into standing at the position of attention for colors.

A video posted by Terminal Lance on March 8, with the tagline “Possibly the coolest thing a band Marine has ever done,” shows a Marine playing colors on his trumpet from the upper floor of a military barracks while others mill about below.

When he starts playing, one Marine kicks a football across the quad and you can almost hear him sigh in irritation. Meanwhile, everybody else stands perfectly still as they stare off in completely different directions.

It takes a while before anyone realizes they’ve been had and you can hear someone in the room shout “Got em!” at the end of the video.

Check it out below.

Possibly the coolest thing a band Marine has ever done.