Marine NCO Delivers Most ‘Moto’ Speech Of All Time

The Marine Corps is all about motivation. It’s probably the only branch of the military where you might get called... 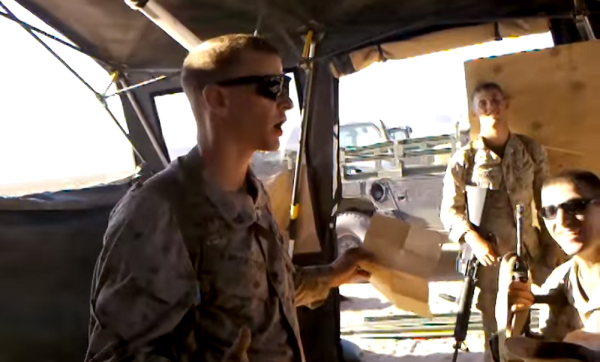 The Marine Corps is all about motivation. It’s probably the only branch of the military where you might get called out for not being gung-ho enough, and while that’s one of the traits that sets Marines apart, it also leads some people to take it a little too far. These Marines are called motards. They live and breath Marine Corps regulations, tradition, and speak entirely in jargon-riddled phrases. Heaven help you if you forget to greet them with a hearty “Ooh-Rah” every time they walk by. Fortunately, you can fake it.

A Marine noncommissioned officer went to incredible, and awesome lengths to do just that by cramming every motivated saying he could think of into one four-minute YouTube video. Shot during predeployment training at Marine Corps Base Twentynine Palms in California, the Marine, identified in the video as Cpl. Rabbi, packs an enlistment’s worth of motivation into one speech.

“Gonna make this real quick, and down and dirty, good to go?” he asks rhetorically. “Don’t shoot the messenger, this is coming from higher. Urinalysis coming up, right around the corner, so you’re gonna need to hydrate, 15 minutes prior, alright? I want to reiterate the fact that we’ve got a lot of fucking moving parts going on, alright? If you’ve got note-taking gear, go ahead and pull it out.”

The short video is jam-packed with jargon, fuck is used like a comma, and “Ooh-Rah,” “err,” and “‘rah” punctuate every one of Rabbi's statements.

Near the end of the video, Rabbi implores his fellow Marines to remember:

“False motivation is?” to which the chorus responds “better than no motivation at all.”