This story has been updated. There are two fundamental truths to life in the U.S. armed forces: ladies love a … Continued 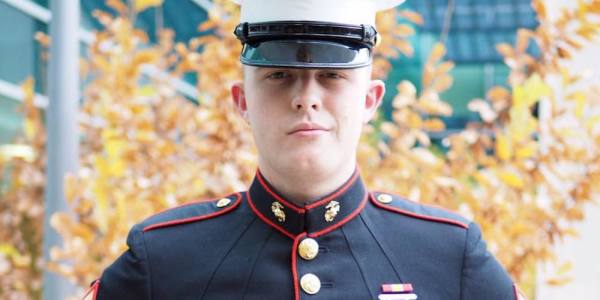 There are two fundamental truths to life in the U.S. armed forces: ladies love a man in uniform, and PowerPoint is the devil. Marine Corps Lance Cpl. Trent Somes has somehow found the perfect balance between the two.

Somes, a 19-year-old Marine Forces Reserve rifleman and student at Washington & Jefferson College in Pittsburgh, Pennsylvania, recently tweaked his profile photos into the format of a terrible yet brilliant PowerPoint presentation on his extreme dateability. BEHOLD!

This is genius. In an online dating ecosystem defined by rippling muscles and downrange selfies, there’s one thing every U.S. service member — active-duty or reservist, grunt or POG, boot or special operator — has in common: torture at the hands of long, boring, and largely indecipherable PowerPoint presentations.

After a few minutes of hearty chuckling, Task & Purpose called up Somes for a dating download.

So what’s your deal?

Nothing special, really! I grew up as a military brat: My dad was an Air Force pilot for 20 years, and after high school, I joined the reserves. I went straight to college after boot camp last year; this summer, I’m headed to the School of Infantry.

Where did you get the idea for this?

I decided to make a Tinder profile just for fun after a breakup, but I was getting kinda bored with it. At one point, I saw that other people had done some creative stuff with their profiles, so I decided to make it my own.

What’s the reaction been?

Most people think its funny. I don’t go on it that often, but I’ve noticed that now I get matches every time I log on as opposed to before when I would go on and not get many.

Of course, I also got called a boot for putting my dress blues in there with my PFC chevron showing, so there’s that.

I think the best reaction all started with some random girl who saw my Tinder tweeting about it. Then a bunch of other military people tweeted about it. Then Lance Corporal Max retweeted it … that was so weird?

THIS MAN MADE A WHOLE TINDER POWERPOINT pic.twitter.com/WKTOYiEaRz

Have you had any takers for a date?

I have actually never been on a Tinder date.

YOU SON OF A BITCH!

Do people get the relationship between the military and PowerPoint?

Oh man, they should. Every time you go in you have to sit through at least one. I’ve had to sit through a few already, on the history and ethics of the Corps; sitting through all of them in public school sort of prepared me, I think.

Have you noticed anything distinct about military PowerPoints?

Every PowerPoint I’ve ever seen has multiple grammatical and spelling errors. I think I had something spelled wrong in mine, and when people pointed it out to me I was like, oh God, I totally did this.

I am really not the person to ask for dating advice. Maybe you should make the title, “Ladies Love A Man In Uniform.”