A young sailor from the Navy cruiser USS Shiloh believed to have fallen overboard on June 8 has just been... 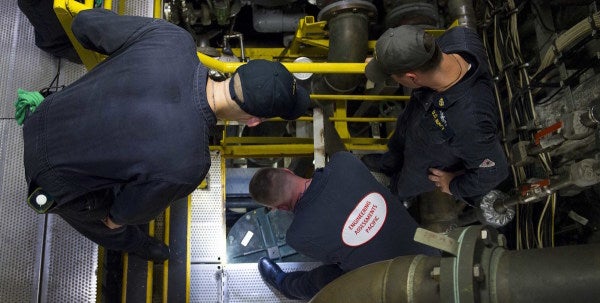 A young sailor from the Navy cruiser USS Shiloh believed to have fallen overboard on June 8 has just been found after a massive 50-hour search-and-rescue operation off the coast of Japan concluded with Navy officials presuming him dead. Not only was the sailor alive (thank God), he was on the ship, hidden in one of the Shiloh’s engine rooms. Like a modern day Huckleberry Finn, Petty Officer 3rd Class Peter Mims appears to have faked his own death. Or at least he let his shipmates believe he had died. This raises a lot of questions, like: Why did he do it? And how the hell did he manage to survive in an engine room for an entire week? Surely, the Navy’s investigation that is now underway will yield the answers to those question, but, in the meantime, here’s a packing list for any other sailors out there thinking about faking their own death while aboard a ship at sea. Because you can never be too prepared.

There’s nothing fun about hiding out in the dark recesses of a naval warship for an extended period of time. You get lonely. There’s nobody to talk to. That’s why you’ll want to pack a volleyball. Use either dirt or engine soot to draw a smiley face on your spherical companion and there you have it: a best friend. (For a more comprehensive how-to, watch Cast Away starring Tom Hanks.)

Gatorade bottles have two primary uses that will come in handy in your fake afterlife. First, they contain gatorade, which you’ll want to drink so you don’t actually die (of dehydration). And second, you can use the empty bottles as portable toilets. Pro tip: Cut one of the bottles in half to accommodate your number twos.

Yes, I know what you’re thinking: fidget spinners are for middle school kids and obnoxious man-babies. And you’re right. However, when you’re hiding from thousands of people in the belly of a Navy cruiser, you need to keep your mind sharp and your fingers dextrous, just in case things get dicy. A fidget spinner will do the trick. As a bonus, you can use it as a ninja throwing star to kill rats, which will be your main source of protein.

If you’re a foodie like me, you’ll be repulsed by the thought of eating filthy rats. But you must do it to survive. There’s an easy fix: a bottle of hot sauce (we recommend either Tabasco or Cholula Chipotle). Not only is hot sauce delicious, it also might kill the parasites that you will ingest with every bite of raw rat meat.

This is perhaps the most crucial item on the packing list, because it’s the most versatile. There’s the obvious utility: warmth. You can also use a bed sheet as a rope, in case you need to climb up into the rafters to evade a search party, or swing from the top of one engine to another in pursuit of a rat. But the best part? In the event you do get found, you can throw it over your head like a spooky ghost. This will send whoever finds you running for the hills, giving you enough time to find another hiding spot.