If you've ever been around, smelled, or inhaled a skunky, sweetly stinky cloud of ganja, then you know what today... 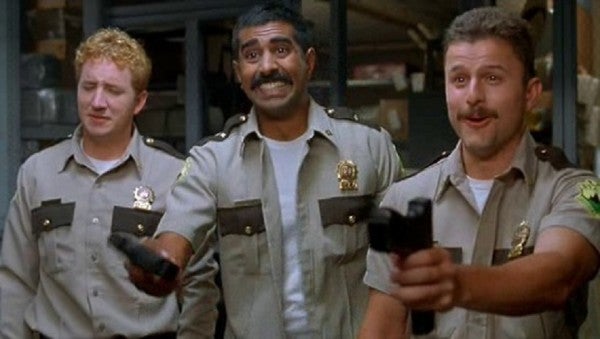 If you've ever been around, smelled, or inhaled a skunky, sweetly stinky cloud of ganja, then you know what today is: 4/20, the international stoner holiday and a not-so-secret code phrase for “let’s get baked out of our minds.”

Thanks to a growing legalization push, this may be one of the most chill non-holidays in recent memory. Marijuana consumption is legal for medical purposes in 27 states as well as the District of Columbia, decriminalized in many others, and eight states plus D.C. have legalized the recreational use, exchange, or sale of weed. There’s a green wave washing across America, and it smells dank as hell.

Despite this, cannabis, and cannabis extracts remain illegal on the federal level, where they’re listed as a Schedule 1 narcotic, right up there with heroin. But local police and sheriff departments are taking to Twitter to wish their resident stoners a happy 4/20 — and on the whole, the statements are pretty chill, especially in states with legalization like Colorado.

Yes, the secret is out. You’re not fooling anyone. We all know you’re high right now.

Ahhh yes, April 20th. Happy 420 is upon us… pic.twitter.com/nraiPzniqK

Others have taken a different tact, laying traps for silly stoners to fall into. Ooh, snacks.

Undercover #420 operations are in place. Discreet traps have been set up throughout the city today. #Happy420 pic.twitter.com/Jo8mh0Z5lQ

You may not think you reek like Pepe Le Pew, but trust us, everyone can smell it.

#Happy420 has a whole different meaning for our pups! Happy 420 #NJSPups! pic.twitter.com/AuKy55QG5A

Really though, nobody cares that you’re high as a kite. The cops just don’t want you to be an idiot about it.

If you are into the whole "wake and bake" thing, please be into the "don't drive thing" too. #DriveSober #420 pic.twitter.com/lhwf9unQFy

But if you do decide to act a fool, be sure to get something out of it. Like a candy bar.

Promoting a safe #420: have an officer test your weed and get a fun-size Snickers. Want a full size bar? Give em your dealers address. pic.twitter.com/vw9CjmTRgm

Also, maybe you shouldn't be strapped like some baked wanna-be Wyatt Earp.

Great intel lead to a positive search warrant for the 1063 team in the 10th District. Weapons and drugs recovered. pic.twitter.com/Kq38HxPOap

Looks like American police departments have been taking notes from a comedy classic: