Comedian Rob Riggle has a plan to kill everyone he meets, or at least television host Conan O’Brien and co-star... 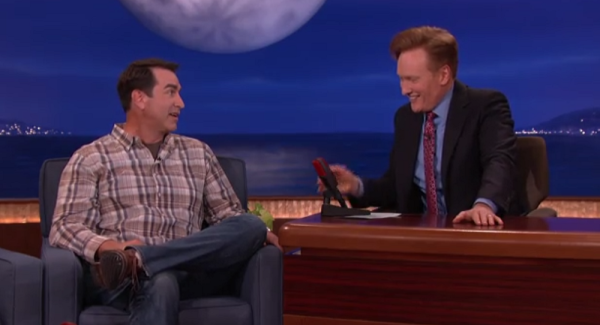 Comedian Rob Riggle has a plan to kill everyone he meets, or at least television host Conan O’Brien and co-star Andy Richter. On a recent episode of TBS’ Conan, the Marine Corps veteran explained that he thinks tactically when he enters a room, goes golfing, or attends an interview on a late-night show.

“You probably know how to kill Andy and I very quickly?” Conan asked.

Riggle laughed before frankly admitting, “Yeah,” with a big smile.

“It’s the weirdest thing though, when you're in the military and you’ve deployed or wherever, you start to get a tactical mind, you just think tactically,” said Riggle, who retired from the Marines in 2013 after 23 years of service. “I’m not kidding, if I go into a restaurant, if I go into a room, I know all my egress points, I know what I’m going to do if there’s trouble.”

Riggle’s comments, while funny, speak to the constant vigilance that many post-9/11 veterans acquire during their service. It also sounds like he’s familiar with the famous quote, “Be polite, be professional, but have a plan to kill everybody you meet,” from retired Marine Gen. James Mattis.

“I was out on the golf course the other day and I was like, this is a great place for an ambush, right here,” said Riggle. “If I was setting this up, look at that saddle right there, there’s a ridgeline. This is dynamite cross-fire. I would not want to be here.”

Check out the video below and watch as Richter and O’Brien try to decide whether or not he’s joking.