Game Over: Russian Spies Have Co-opted Our Reflective PT Belts

As Vladimir Putin continues his meteoric ascent from lowly KGB desk jockey to giant axe-wielding democracy-defiler, many of us may … Continued 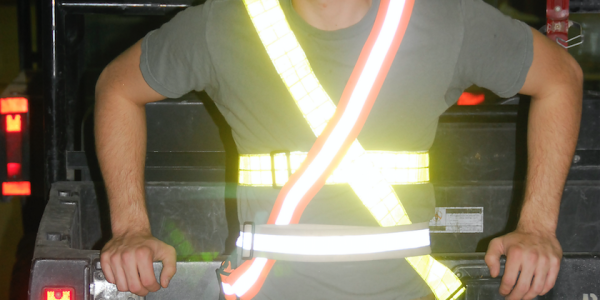 As Vladimir Putin continues his meteoric ascent from lowly KGB desk jockey to giant axe-wielding democracy-defiler, many of us may find ourselves wondering whether the people we know and love are secretly playing for Team Russia. For example, my colleague Patrick Baker. He’s got unusually small hands and shifty eyes. And he’s never not in the bathroom. There simply isn’t enough room in the large intestine for all the potty breaks that guy purports to take. (FYI Pat: the Febreeze isn’t in there for decoration.)

Sometimes the clues are more obvious, like a badly glued-on fake mustache or a yo-yo buzzsaw. And then there’s the curious case of Maria Butina, the comely 29-year-old Second Amendment advocate recently apprehended by the FBI on charges of being a Russian spy, who’s flipped the script completely with her benevolent red hair and safety-first approach to espionage.

Butina’s safety orientation was on full display when she showed up to a National Rifle Association convention several years ago wearing, yes, you guessed it: a motherfucking reflective PT belt.

According to U.S. military lore, when worn properly around the waist or diagonally across the chest, the reflective (or glow) belt creates a magic force field against bullets, bombs, and the prying eyes of enemy operatives. Somehow that life-saving technology ended up in the hands of the Russians, who now seem to be using it against us in their ongoing campaign for global domination.

Fake news? If only we were so lucky.

In 2014, Butina arrived at the NRA’s annual meeting in Indianapolis dressed to impress in a slim-fitting floral jumpsuit and dashing pearl necklace. Butina now stands accused of conspiring against the U.S. government on behalf of Moscow; she allegedly tried to broker a meeting between Papa Putin and then-candidate Donald Trump, and also, according to federal prosecutors, once offered sex to an unidentified American political operative in exchange for “a position within a special interest organization.”

In Indy, she had a lot of schmoozing to do. But of course, she also had to make it out alive. Reflective belts come in all different colors. There are red ones, green ones, white ones, and, no kidding, even pink ones. They all signify the same thing: a warrior’s spirit. They also say: Look out! Don’t run over me with your car.

Butina opted for canary yellow, presumably to compliment the daffodils on her jumpsuit. The belt appears around Butina’s waist in a photograph she took at the NRA convention with Rick Santorum, the former senator from Pennsylvania. Santorum, my friend, you got flimflammed. Take a closer look:

Don’t see it? Great. That means you’re one of the good guys.