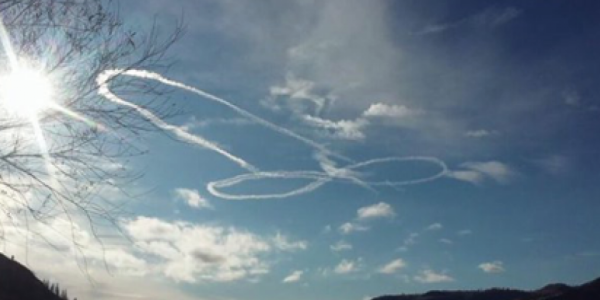 Two cocky Navy pilots ended up in hot water after using the contrail from their E/A-18 Growler to draw a massive penis and testicles in the skies above Okanogan County, Washington, on Nov. 17. While the responsible aircrew with the Electronic Attack Squadron 130 out of Naval Air Station Whidbey Island has yet to be identified, naval aviation chief Vice Adm. Mike Shoemaker promised to hold the crew accountable for the “sophomoric and immature antics of a sexual nature” that the Navy deemed “absolutely unacceptable of zero training value

But as Washington Post military reporter Dan Lamothe notes, the phallus has occasionally held a place in modern U.S. air warfare before — far beyond the suggestive nuclear tip of the Minuteman III ICBM.

The recent history of similar confirmed phallus-sightings is short and disappointing (I swear this never happens to me); the only other recorded incident of DoD personnel engaging in aerial dong-scrawling occurred in 2012, when a group of Blue Angels painted a “large blue and gold penis” on the roof of a trailer at the group’s El Centro, California, winter training facilities.

The phallus in question “was visible from satellite imagery (e.g. Google Maps)… through the end of the 2012 airshow season,” until an unnamed airman “bought paint with his own money and painted over the penis,” according to a Navy report on violations of the elite flight demonstration squad’s sexual harassment policies made public in 2014 (As Lamothe points out, the Navy’s sexual harassment policy “cover a wide range of behaviors, from verbal comments to physical acts, and can be subtle or overt” — which ostensibly includes intimidation by testicular constellation).

The dearth of officially acknowledged dongscapades isn’t totally confined to American armed forces. In 2014, a Royal Air Force pilot crafted what looked, to many local residents, like a giant penis in the skies over RAF Base Lossiemouth in Moray, Scotland.

A penis in the sky over Moray, Scotland, circa 2014Photo via Express/YouTube

Ironically, British military emphasized that the smokey junk “was not what it perhaps appears to be,” according to the Express. “The pilot concerned was flying in a holding pattern, which is what all aircraft do when they are waiting to land,” a spokesman stated. “The matter was looked into, but this is not a case of someone being silly.”

If aspiring aviators want to outdo their fellow cock-jockeys, they’ll have to aim higher than their local airspace — literally. In 2013, NASA's aging Opportunity Mars rover, definitely, absolutely, indisputably drew a dick on the surface of the Red Planet.

A penis. On Mars.Photo via NASA

Are NASA astronauts technically aviators? Does programming a drone rover from the earthen comfort of mission control qualify as “piloting”? Important questions, but irrelevant: In terms of drawing dicks in the sky, foisting a tallywacker onto the surface of Mars has to qualify as rising to a challenge.