When Exactly Should You Use A Shotgun? Check This Gritty 1970s Police Training Video

Here at Task & Purpose, we're tremendous fans of the retro training video. A technicolor artifact from a simpler time, … Continued 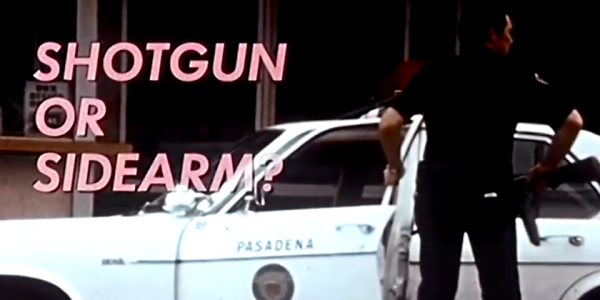 Here at Task & Purpose, we're tremendous fans of the retro training video. A technicolor artifact from a simpler time, they're a captivating (and inadvertently hilarious) windows into the U.S. armed forces of yesteryear, from the life of a Vietnam-era Huey door gunner to a Marine Corps Reserve recruiting officer.

But hey, they're also informative! Like this 15-minute 1976 training video on when, exactly, you should keep your sidearm holstered and go fucking buck wild with your trusty pump-action shotgun.

Yes, it's civilian law enforcement, and yes, it's not exactly a love letter to the trusty Mossberg that's the breaching weapon of choice for anyone itching to throw down. But by God, the Pasadena Police Department basically created a short hard-boiled cop film, complete with urban gunfire. I mean, it opens with basically the worst possible way you can use a shotgun:

Joking aside, the video's message doesn't bode well for the shotgun-obsessed: it's more a cautionary tale regarding the awesome and often uncontrollable power of military-grade buckshot. “A shotgun is a wrong weapon in just about any situation where you can expect innocent people to be nearby,” the narrator scowls. “In a busy area like this, there are too many elements you can't control.”

So why carry one? Simple: “You can whirl, fire, and blow the guy away.”

These training videos are courtesy of the diligent Jeff Quitney. If you need me, I'll be over here drinking bourbon and wondering what the hell I just watched.