Slate Tries, Fails To Explain How Military Uniform Shirts Are So Neatly Tucked In

The secrets of looking good in a military uniform is a mystery unlocked only through the halls of boot camp, … Continued 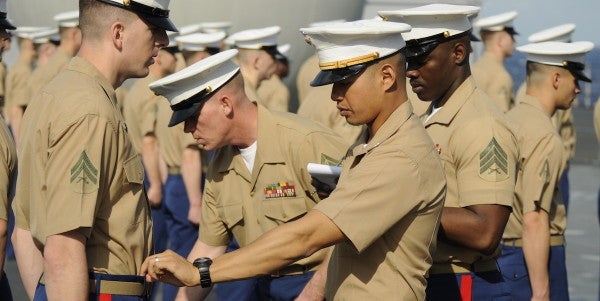 The secrets of looking good in a military uniform is a mystery unlocked only through the halls of boot camp, where lessons of shining shoes, folding sleeves, and ironing wax into creases abound. Meanwhile, people in the civilian world seek to look their best, without those time and battle-tested tricks.

In a recent video, the folks at Slate sought to fix that, and unearth the mystery of the military shirt staying so perfectly tucked. This, in and of itself, is a noble endeavor, but Slate only captures half of the solution to keeping your shirt tucked in to military standards.

In the video, Slate demonstrates the “military tuck,” the practice of folding the excess fabric of your shirt behind your back when you tuck it in. But the military doesn’t call it a “military tuck,” much for the same reason I imagine people in Germany would just call a German Shepherd a dog. In the military, the practice is called “blousing your shirt,” evoking a little-used definition of the word blouse that I, for one, have only ever heard in the military. Blouse, verb; “to dispose the material of a garment in loose folds, as trouser legs over the tops of boots.” It’s a handy word; it should catch on more.

Anyway, in the video, the folks at Slate say that this is the secret to keeping your shirt tucked in and looking neat, this “military tuck.” Blousing your shirt does indeed look neat and slimming. But unless there’s something keeping your shirt taut, the first time you bend over or stretch or otherwise move, you’re going to be back at square one.

The second half of the equation is the shirt stay: clip-on elastic garters that attach to your shirt and then either clip on to your socks or loop around your feet. Rock a pair of those, and you’ll stay crisp and tucked in all day. It can be confining, but sometimes looking good involves being a little bit uncomfortable.

Check out Slate’s video below: