It started with a simple question: “Any of my Air Force people know this guy?” and a photo of the … Continued 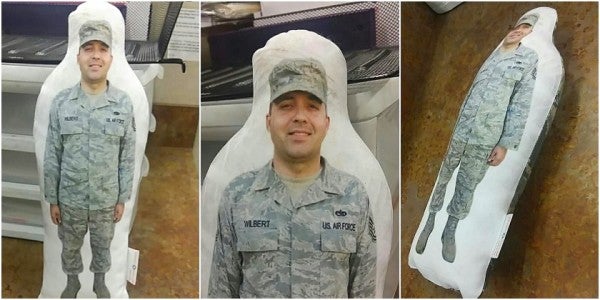 It started with a simple question: “Any of my Air Force people know this guy?” and a photo of the missing, uhm, individual.

The photos were posted to Facebook by Kansas resident Jarea Jarrell on Sept. 8 along with a call to action: “This pillow was found in a gas station parking lot in Wellington and they are try’n to locate the owner!”

Days later, the full-sized body pillow, a plushy likeness of one Air Force Tech Sgt. Joshua Wilbert, was on its way home to his wife, Jessica Wilbert, and their two sons, ages six and two — all thanks to a network of Facebook sleuths, concerned vets, service members and military families, buoyed by shares and reposts on military-centric Facebook pages.

Here’s the skinny on how a fluffy doppelganger of an airman become a viral social media post: Over Labor Day weekend, Jessica and her sons were on their way home to Warrensburg, Missouri, after visiting friends in Oklahoma when they stopped at a gas station in Wellington, Kansas.

Related: We Salute The National Guard Lieutenant Who Led Virginia Police On A High-Speed Chase In A Stolen M577 »

During the stop, the pillow — one of two Jessica had made so her sons could cuddle with their dad at night after he deployed to Korea a year ago — fell out of the car.

“I’m assuming a worker at the gas station found it, but another military wife from that area, she happened to see it and she found me through the Lost During My PCS Facebook page, and messaged me,” Jessica said. “She asked if that was our doll, and I said yes, and her mom picked it up and they just put it in the mail yesterday, and it’s headed back our way.”

In just a week, the couple received numerous messages on Facebook asking if the pillow belonged to them.

“It’s crazy to see how far it reached, I didn’t realize it was missing until people messaged me, I was tearing the house apart looking for it,” she told Task & Purpose, adding that in the interim her sons have had to share the remaining “daddy doll.”

“I was blown away and surprised that there are actually still good people out there,” she added. “People you don’t even know that took the time to give us this doll back. I was speechless. It was an amazing moment.”