A Survival Guide To The Best And Worst MREs

For troops operating beyond the borders of large bases and installations, there are few constants, but one of them is... 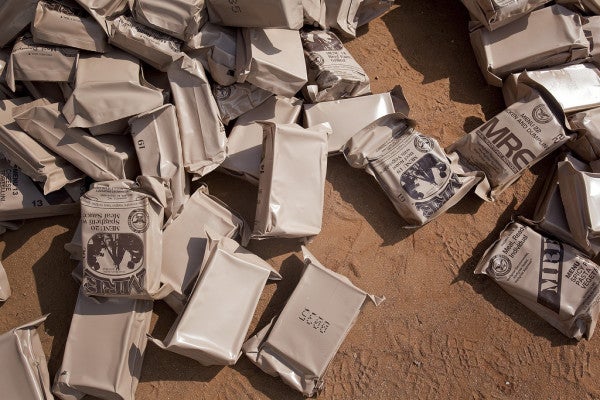 For troops operating beyond the borders of large bases and installations, there are few constants, but one of them is that most of what you eat will come from a bag in the form of Meals Ready-To-Eat, or MREs.

If you’re living rough, you may be eating two a day, so knowing which ones are worth your time is important.

From 2009 to 2010, I was a combat correspondent, attached to 1st Battalion, 6th Marines, bouncing around Marjah in Helmand province, Afghanistan, and fast realizing what grunts have long known: There are good and bad MREs and right and wrong ways to eat them.

During that deployment — and again with the same unit in 2011 in Kajaki Sofla and Sangin, Afghanistan — Marines subsisted almost entirely off of MREs when not at the company or battalion headquarters.

While making an MRE is simple enough, knowing how to spice one up is a vital skill.

The infantrymen who took me under their wing showed me the wonders of hot sauce, spices, and seasoning; how to make a bowl out of my MRE bag; and helped me realize why the last meals in every box were either veggie burger or beef enchilada.

Related: The 3 best shooter, strategy games, according to a veteran.

Here’s a list of the worst and best MREs for anyone else who feels both queasy and nostalgic around the distinct and lingering aroma of “MRE farts” and has ever felt childlike joy tearing into chili mac.

Whoever thought it was a good idea to try to feed this to troops, never spent much time around them. By and large, the military is composed of red-meat lovers, and nothing is further from that than a veggie burger, especially one that’s been vacuum sealed and has the consistency of wet cardboard. Furthermore, the damn thing only comes with dried fruit, knock-off Gatorade powder, a chocolate banana muffin — to be fair it’s not bad — and two slices of wheat snack bread. I’m willing to bet that anyone who starts out a deployment as a vegetarian gives up after a week of veggie burgers.

If you want a crash course in gastrointestinal distress, be sure to eat not just the enchilada, but also the refried beans, and the cheese spread; don’t forget to kneed the package with your fingers to make sure it mixes in with the meal. Then once you’re done scarfing that down, make sure you hop into the first sergeant’s MRAP and get revenge for all those ass chewings about white socks as you spend the next hour chemically bombing the enclosed vehicle and basking in your rank stench.

Unlike most MREs, which feel like an entree with a bunch of random sides thrown into the mix, the fajita is actually a meal. In addition to the main item, you get a side of Mexican rice, crackers, and jalapeno cheese spread. If you can, trade a buddy for his or her tortillas, fold your MRE bag back into a bowl, and heat your fajita, rice, and cheese. Once they’re warmed up, pour them in and mix it all together, adding hot sauce and seasoning to taste. Then take your spoon and ladle a healthy portion onto a tortilla wrap, roll it up, and enjoy.

Chili and macaroni, aka chili mac

If you can actually get your hands on this one, and you’re able to find a safe place where no one’s going to come out of nowhere and steal it from you, then you’ve won at deployed life. Toss on your MRE top chef hat, or a boonie cover, or whatever, and dig in. Obviously, as the name implies, you’ve got chili and macaroni, but if you have the newest version, you’ll have your customary cheese spread, crackers, and a pound cake for dessert. There’s not much you can do to improve upon excellence. Just heat it up, grab your spoon and gorge yourself on the most American things in all the world: mac n’ cheese and red meat.