The video is simple and light-hearted. A U.S. Marine lance corporal stands next to a Korean private first class. They … Continued 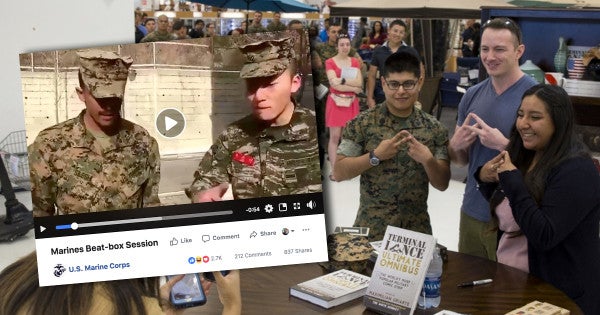 The video is simple and light-hearted. A U.S. Marine lance corporal stands next to a Korean private first class. They introduce each other, then they both start beatboxing for about a minute.

Not surprisingly, it went viral after it was posted on the Terminal Lance Instagram, racking up more than 160,000 views. What was a surprise, however, was it being reposted on the official Marine Corps Facebook page with its 3.4 million fans.

Some commenters were interested by what appeared to be a collaboration between Headquarters Marine Corps and the unsanctioned-yet-beloved Terminal Lance web comic started in 2010 by former Marine Lance Cpl. Maximilian Uriarte.

It turns out it wasn't a collaboration at all.

“I wasn’t going to make it a big deal because I don’t own the video in the first place and, as social media goes, things get taken and reposted all the time,” Maximilian Uriarte, the creator of the Terminal Lance web comic, told Task & Purpose.

“I appreciate that they tagged me,” he added. “But it just makes me feel gross either way.”

Soon after Uriarte posted the video, someone from the Corps' social media team reached out and asked if he could send them the video so it could be posted on the Corps' official social media channels. Though he only asked whether they would tag Terminal Lance and never explicitly gave them permission, he said, what made him far more uncomfortable was the thought that Marines beatboxing was considered fine, but other submissions he posts could potentially get Marines' careers ruined.

“What bothers me is the tumultuous history that I have with the Marine Corps punishing Marines for posting funny social media videos (on Terminal Lance),” Uriarte said. “I don’t know what constitutes a cute enough video to share on official channels and what is worth burning a Marine's career over.”

He added: “Marines send me these things because I’ve spent years building up their trust and audience, and every day I get panicked Lance Corporals pleading with me to take down some video they sent the night before because their chain of command is trying to burn them,” Uriarte said.

This video, apparently shot on a cellphone, showed a Marine at what looked like a morale function or warrior night with other U.S. and Korean Marines. Yelling can be heard as the Marine in front of the camera shakes up a beer can and then smashes it on his head, spraying beer everywhere.

Immature? Sure. But outside the norm for a Marine grunt having fun with his fellow Marines? Hardly.

And yet after Uriarte posted that video, he received a number of panicked messages from other Marines in the unit. “We are losing our 96 this weekend,” one wrote. “If you could take it down you would save an entire battalion.”

Another said the Marine in the video was likely getting non-judicial punishment for the stunt (the Marine in question did not immediately respond to a request for comment from Task & Purpose).

“The higher ups are giving us 48hrs or things will get stupid,” another wrote.

“Their held the battalion hostage threatening to cancel Thanksgiving libo until the video came down,” Uriarte said. “Like what the fuck?”

Uriarte is well aware that the public affairs Marines running the social media channels are not the same people running fleet units that are getting pissed at Marines for appearing in what are essentially harmless videos.

But, he said, “The problem is unit leaders like this battalion commander frequently fuck over young Marines over my videos and content … I just know what it feels like to be 19 and powerless in everything you do, so my sympathies are always with the Marines and never the Corps.”

Maj. Brian Block, a Marine Corps spokesman, told Task & Purpose the context surrounding each social media posts varies, and so they are addressed on an individual basis.

“Marines should be aware that in a world connected via social media their conduct is visible to ever more people and that behavior has consequences,” Block said. “The Marine Corps' expectation that Marines live up to our core values of honor, courage, and commitment has not changed, online or off.”