The 9 Crappiest Pieces Of Gear In The Corps

One of the benefits of serving in the military is having the chance to use all kinds of cool equipment... 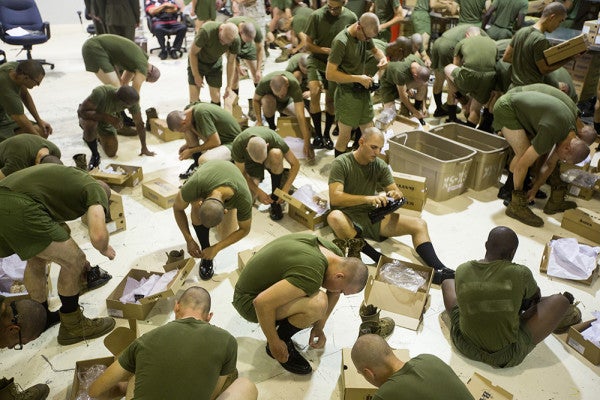 One of the benefits of serving in the military is having the chance to use all kinds of cool equipment like in Hollywood action movies and repetitive Call of Duty games. The Army has its hi-tech Strykers; the Navy has its powerful nuclear engines; the Air Force, its exquisite nine-hole golf courses; and the Coast Guard has, actually I don't know, orange helicopters?

As for the Marines, well, we have our own things.

Like 30-pound radios with shrapnel from Vietnam still embedded in them and fleece beanies we're not allowed to wear when it’s cold for some reason. The Corps doesn't really get the gear on the higher end of the coolness spectrum. I know my people tend to brag that our branch is the tip of the spear, but the truth is we get the shaft.

Related: 6 Marine Corps ‘rules’ that are not actually regulations »

Yes, it's been a few years since I left active duty so the stuff being issued to Marines these days may have changed. Pfft, who am I kidding? We'll keep getting the same crappy gear and Army leftovers for years to come. In a thousand years our descendants will be fighting giant squid people on Neptune and celebrating the F-35 finally being completed as they pick silk wedgies out of their asscracks during morning physical training.

Anyway, here are nine issued Marine Corps items that aren’t going away, even though they should.

Outside of training, I don't think I saw anyone actually use a canteen. Between CamelBaks, Nalgenes, and the various other brands of water sacks and reusable bottles, there are a whole lot of ways to carry more water with greater ease than a pair of plastic flasks. And no matter what you do to clean them, the inside always smells like plastic and old swamp water.

Any time there's an event — wedding, funeral, birthday ball, horse cavalry charge, etc. — where corporals and above might need to wear a sword, you just end up wearing the cooler looking Sam Brown belt.

So really, what's the point?

For those who haven't used night vision goggles, they don't work like in the movies. In Hollywood, night vision paints the world in perfect detail with a green tint, but in reality, everything looks like an old Game Boy game: two-dimensional, two-toned, and full of deadly turtles.

Before my first night patrol, I joked that our night vision goggles were only good for seeing what you've just tripped over. Everybody had a good chuckle. Then I tripped several times that night. Everybody had more good chuckles. Then we almost lost a Marine who fell down a huge hole that none of us could see and it took us a few minutes to figure out what happened. Nobody chuckled.

Look, I know some of my fellow Marines out there have a certain affection for silkies, as they’re often called. But they're stupid. Really, really stupid. We can't keep bragging that we have the best looking uniforms of all the services when there are packs of our brothers and sisters PT-ing in these crotch-hugging nightmares.

Remember when there was all that hoopla about the Marine Corps considering changing the design of this thing, and everybody got up in arms about how they thought the idea for the new cover, which was really just an older version, looked stupid? It was a pretty laughable “controversy” to me, because I thought the version we have now looks pretty stupid too.

I always hated having to wear that white Frisbee-looking thing on the walk from my car to wherever the birthday ball was, then putting it on a table with dozens of ones just like it for the rest of the night.

Maybe these were all the rage in the days before body armor, and the lingering shoulder pain that goes with it was standard in the field. But nowadays, what with flaks and plate carriers having MOLLE straps on them, this thing is just another piece of tan nylon you have to worry about losing in your closet.

The Korean War was a long time ago. Haven't less crappy ways to keep our hands come about since then? Ways that don’t smell like grandma’s basement and look like something a serial killer in the 1930s would wear?

So if we want to have our trousers bloused but also have the option to unblouse them in extremely hot weather, why don't we just have uniform trousers with drawstrings at the bottom? Oh, that's right: because it would be easy and convenient and save Marines money. And that's just not how we do things, dagnabbit!

Yes, the iconic sidearm of the U.S. military since 1985 sucks. Hard.

Granted, I was an utterly miserable shot with this thing and would probably have had better luck neutralizing an enemy if I threw it at them instead of firing it. But I'm definitely not alone in considering the M9 a paperweight that occasionally fires an inaccurate round with low stopping power. You also have to carry this paperweight around in the field or on deployment to boot. Basically the worst kind of paperweight you can imagine. Oh, and the magazines are malfunction prone.