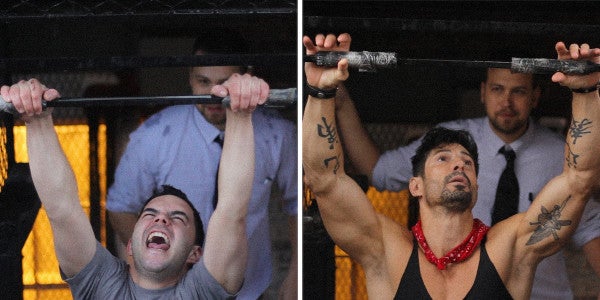 A combat veteran of Iraq and Afghanistan, elite recon Marine veteran, and international martial arts champion, we knew Rudy Reyes was pretty tough. Reyes enlisted in the Corps in 1998, where he spent seven years as a reconnaissance Marine and scout sniper. He even played himself in HBO’s “Generation Kill” when the producers couldn’t find an actor badass enough to portray him.

But is he tough enough to beat Task & Purpose journalist Russell Midori — a public affairs Marine who once deployed to Western Europe in peacetime? Midori, after all, has seen all seven “Rocky” movies, listens to a number of podcasts about karate, and once took first place in a sanctioned thumb-wrestling competition in Brooklyn.

10 Questions Only A Veteran Would Ask Rudy Reyes »

We decided to put both men to the test by holding the inaugural Task & Purpose “Man of Steel” competition, pitting these two warfighters against one another.

Things got ugly for Reyes. Check it out.