When It Comes To Military Humor, Go Easy On The Jargon, Bro

When it comes to cracking jokes and generally making people laugh, military service gives you a lot of material to... 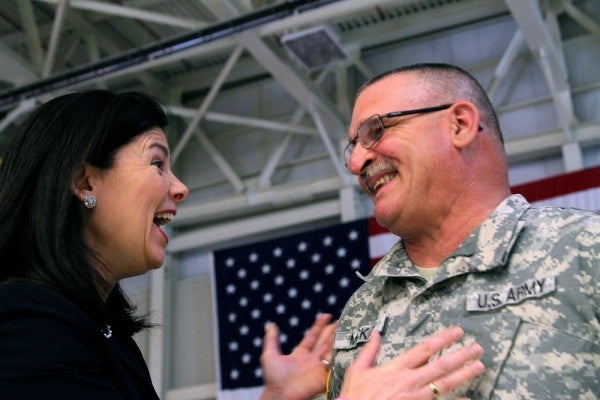 When it comes to cracking jokes and generally making people laugh, military service gives you a lot of material to work with. Between training, deployments, and everyday life in a military town or on base, there’s no shortage of stupefying and funny anecdotes that give way to a unique brand of comedy: military humor.

But, there’s a catch. If you’re talking to people who don’t know what it’s like to serve, then there's no context, and your jokes are going to fall flat.

For example, shortly after I left the Marines, I tried to tell a funny story about having the runs on deployment and sneaking off to find a quiet place to take a dump. Suddenly a group of officers walked around the corner and got an eyeful of me, explosively relieving myself against a mudwall. Awkward.

Related: Being funny doesn’t make you a comedian. Yeah, really »

But, when I told the joke to my friends and family, I couldn’t get through the first line without being interrupted.

“So we were outside the wire and didn’t have toilets—”

“Uh, it means being away from a large base. So there I was, squatting over my Wag Bag, and trying not to miss too much, when all of a sudden—”

“For the love of God stop interrupting me!”

So, what do you do when you’ve got a bunch of material you’re dying to share, but you feel like you need to hand out military-civilian translation guides before you start?

Task & Purpose asked Steve Mazan, a Navy veteran and professional comic, about his experiences with military humor in a mixed audience. Mazan has been doing stand up for the last 17 years and frequently performs for both military and civilian audiences.

He explained that the most important thing is context.

You need to know your audience.

“There’s a section in my comedy book that’s specifically for military comedy shows,” says Mazan. “There’s so much lingo in the military that military people deal with, and there’s just a different mindset.”

According to Mazan, a lot of what’s funny to one service member is universal for anyone who’s served, but the joke needs that shared experience to work.

“If you’re the funny guy at work and you take that to the stage, well those people are all strangers,” explains Mazan. “They don’t know the stuff that you’re talking about that’s funny at work. Military shows are like that in a big sense. At some level, military personnel do share a lot of those same things.”

Mazan adds that there are some jokes he always uses for a military crowd.

“There’s a bit I always do where I explain that I was enlisted when I was in and couldn’t wait to get out because I didn’t like listening to officers and didn't like them telling me what to do all the time,” says Mazan, adding that he calls out an officer in the audience and when they start responding he walks away, saying, “I’ve been waiting 15 years to do this.”

Obviously a joke like that won’t work with a civilian crowd.

But context works both ways.

Mazan explains how some jokes that go over great for a civilian audience don’t always work in a military crowd.

For example, jokes about smoking pot tend to flop in a crowd full of active-duty troops.

“Just because it is a little frowned upon in the military, a little taboo, it just doesn’t seem to work,” says Mazan, referring to jokes about drug use, and it makes sense if you’re sitting in the audience 10 feet away from your boss, you don’t want to be the only guy laughing at a joke about the stupid shit people do when they’re “tripping balls.”