Freedom and Opportunity: A Togolese-American story

In West Africa on the Gulf of Guinea stands Lomé, a port of trade and transportation hub that is the … Continued 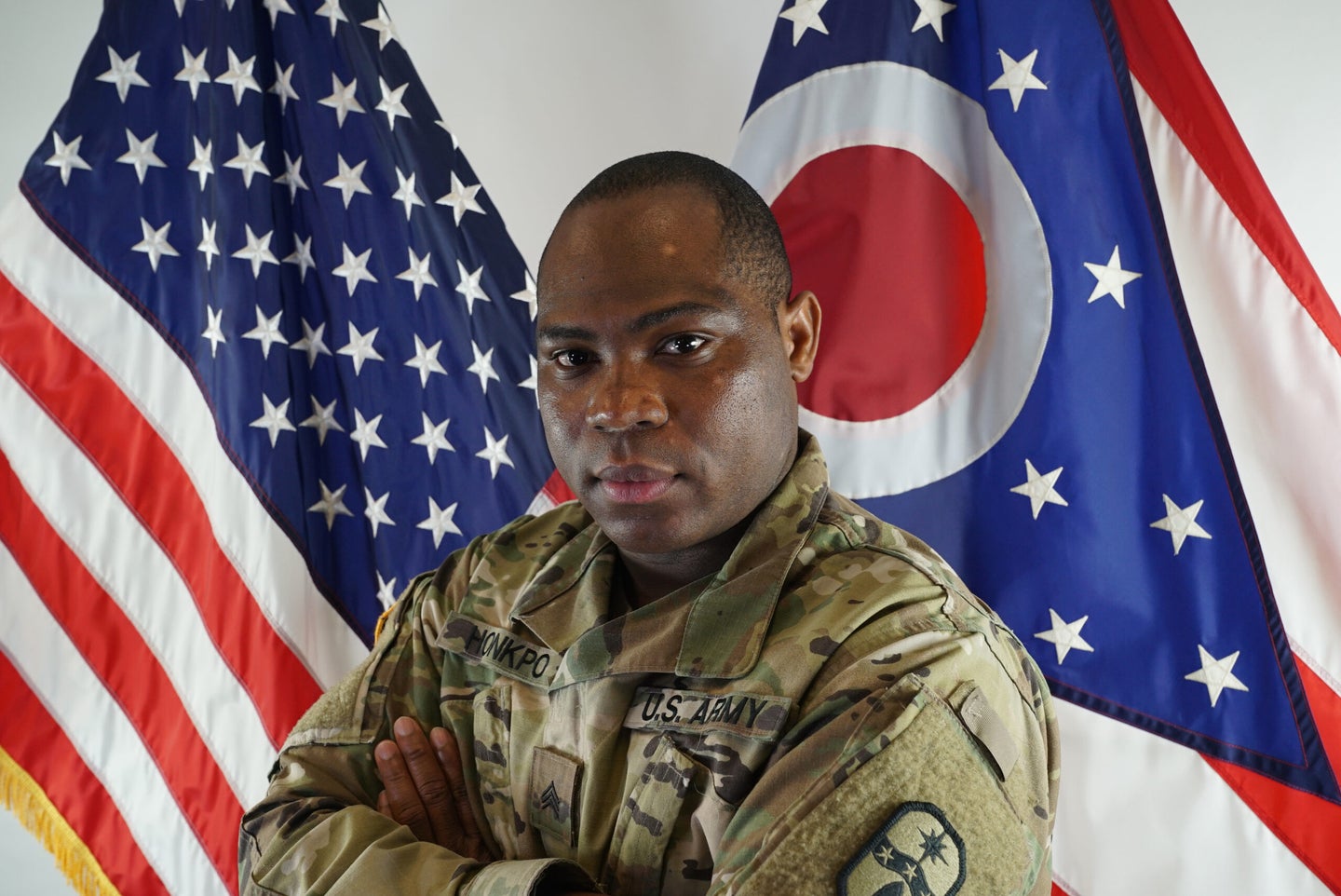 Sgt. Kouami Honkpo, an incentives specialist in the Ohio National Guard Education and Incentives Office, poses for a photo Feb. 24, 2020, at the Maj. Gen. Robert S. Beightler Armory in Columbus, Ohio. Although he has not yet deployed during his military career, Honkpo, who grew up in Togo, West Africa, said one of his motivations for joining the U.S. military was for the opportunity to help spread democracy and freedom throughout the world.
SHARE

In West Africa on the Gulf of Guinea stands Lomé, a port of trade and transportation hub that is the heart of Togo’s economy.

This was the tropical, Atlantic Coast home to Sgt. Kouami Honkpo through his childhood. Honkpo — now an incentives specialist in the Ohio National Guard Education and Incentives Office as a full-time federal technician and a human resources specialist with the 371st Sustainment Brigade in his traditional position — remembers hot days watching and playing soccer, friendly people everywhere and special times with his family.

The capital city of Lomé is said to be a mix of old and new, both an overgrown village and a cosmopolitan city of over 1 million people. It is a tourism destination with white beaches and a beautiful countryside, but Togo is also one of the 10 poorest countries in the world, according to the International Monetary Fund. The country had been ruled by military leaders since the late 1960s. Freedoms that are a second thought in western cultures, including the U.S., were limited and elections did not really provide alternatives to the rulers who held power.

Honkpo came to the U.S. on a Diversity Immigrant Visa Program and settled in Ohio, earning a bachelor’s degree in financial management from Columbus State. Honkpo joined the Ohio Army National Guard in 2015 and continues to look for more opportunities. The Galloway, Ohio resident is considering Officer Candidate School and looking into earning a Master of Business Administration.

Although he has not yet deployed during his military career, Honkpo said one of his motivations for joining the U.S. military was for the opportunity to help spread democracy and freedom throughout the world.

Honkpo encourages his lower-enlisted Soldiers to be well-rounded, to be good Soldiers but also to be successful in civilian life. He tells them to go to school to become “something big” because that’s what his father, who still lives in Togo, encouraged him to do.

Honkpo has not been back to Togo to see his family since 2015, but his wife, Kuessiba Tossou, is also a Togolese-American, and the two of them are raising two boys, Jacob, 4, and Daniel, 1.

“They always motivated me to work hard,” Honkpo said. “They are really smart, and they said I could be something like them and gave me all the training I needed to be successful.”

Another influence on Honkpo’s life has been his childhood church friend from Togo, active-duty Army Sgt. Kossivi Abalo, an aircraft powertrain repairer who is currently stationed at Fort Riley, Kansas.

“Kouami wanted to serve the country that helped him further his education and gave him his freedoms,” Abalo said. “The people of Togo are very friendly. It’s just that it is very difficult to take care of your family there. There are not many opportunities.”

Abalo and Honkpo have followed similar paths in coming to the United States and joining the U.S. military. Abalo said that Honkpo is like a brother to him, and in 2011 he was the only person from Togo that Abalo knew when he arrived in the U.S.

“Kouami is a good person,” Abalo said. “Morally, spiritually, everything — he is really good.”