18-year-old Maria Daume’s path to the yellow footprints of Parris Island, South Carolina, which will culminate in her graduation on Jan. 13 before later heading off to the Marine Corps’ School of Infantry, began years ago in a prison in Siberia, Russia, where she was born. 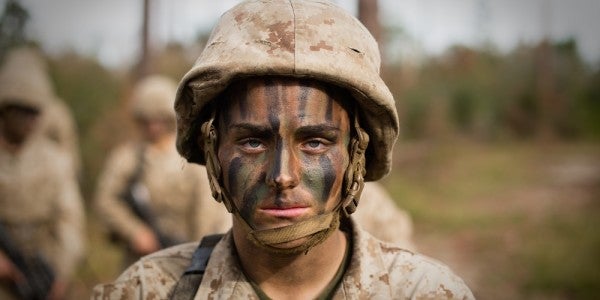 Editor's note: A version of this article was originally published on Jan. 12, 2017. Maria Daume has since graduated Marine Corps Recruit Training, and graduated from the Marine Corps' School of Infantry East on March 23, 2017.

The journey that leads to military service is as varied and unique as those who choose to serve and for one young Marine, this is particularly true.

18-year-old Maria Daume’s path to the yellow footprints of Parris Island, South Carolina, which will culminate in her graduation on Jan. 13 before later heading off to the Marine Corps’ School of Infantry, began years ago in a prison in Siberia, Russia, where she was born.

Daume and her twin brother Nikolai were born while her mother was incarcerated and lived in the prison with her for two years until their mother's death. They were moved to an orphanage in Moscow for two more years before the twins were adopted by an American family living in Long Island, New York.

On Jan. 13 Daume will graduate from boot camp as a private, just over three months after arriving at Recruit Depot Parris Island. Recently Daume completed the Crucible, the final training event recruits undergo before earning the Eagle, Globe, and Anchor; and the title Marine.

“I came here thinking it was all physical and I did not realize there were classes and so much to learn about the Marine Corps,” she told Task & Purpose in an interview. “That was definitely the hardest part, all the knowledge and everything you have to retain. It’s on you. You can’t expect that somebody else is going to teach you, you learn it and it’s your job to grasp it.”

Daume is one of four female Marines who will graduate from Parris Island on Jan. 13 with a contract into infantry, making them among the first women to enlist into the career field. After the graduation ceremony and block leave, she and three other female Marines will begin infantry training.

For Daume, the decision to enlist in the infantry boiled down to one thing, she wants to fight, she said.

“I want to fight ISIS,” said Daume. “Even though everybody in the military fights, I want to be a grunt. I think everything about it is for me, and I want to prove that females can do it.”

When she was a teenager, Daume was at a fundraiser for brain cancer awareness when she saw a group of Marines with a stand and a pull up bar.

“They were doing pull-ups and push ups and I fell in love with it right off the bat,” Daume said. “When I met my recruiter through our high school, he already knew about me from the recruiter I met when I was 12 years old at the cancer fundraiser.”

Growing up in the States, Daume had a relatively normal childhood, but it wasn’t without adversity. She was bullied in school, sometimes for being adopted, other times for where she was born, but it led her to develop a thick skin and a cool head.

“They would say things about my mom and why she was in prison even if no one knew why,” Daume said in a Department of Defense news release. “Bullying was a big thing.”

A lifelong competitor, she took to playing sports from basketball to soccer, softball, field hockey, and competed in mixed-martial arts, where the ability to take a hit and remain calm and controlled is crucial.

“With MMA it is all about staying calm and not getting angry,” Daume said in the press release. “If you get angry you can make stupid mistakes. I know how to get hit and keep cool. With the team sports, you have to work together. When you’re a team, you’re a family.”

That competitive spirit is what led her to the Marines, she said.

From the start, she knew what she wanted to do in the Corps, and when the military opened the doors for women to serve in ground combat roles she went to the Marine recruiter’s office with one job in mind: Daume wanted to be a grunt.

“Once I walked in and I told him ‘I want to be deployed. I want to go infantry,’ he said O.K. and right off the bat I could tell my recruiter had my back, and he wasn’t going to say O.K. just to say O.K,” she said. “He was going to do his job and help me out. He helped me a lot to get my infantry contract.”

While aware that her decision to enter the Marine Corps with an infantry contract places her at the center of politically charged debates surrounding women in combat roles, Daume sees her decision as a personal one. However she’s quick to point out that what she’s seeking to do isn’t entirely new, women have and will serve in combat, just like men.

“Women have been in combat for years and so I don’t feel a lot of pressure in that regard,” she said. “I’m not really worried about what anybody thinks. I’m going to get through it and do it for me, and for other females joining the military so they can do it as well.”