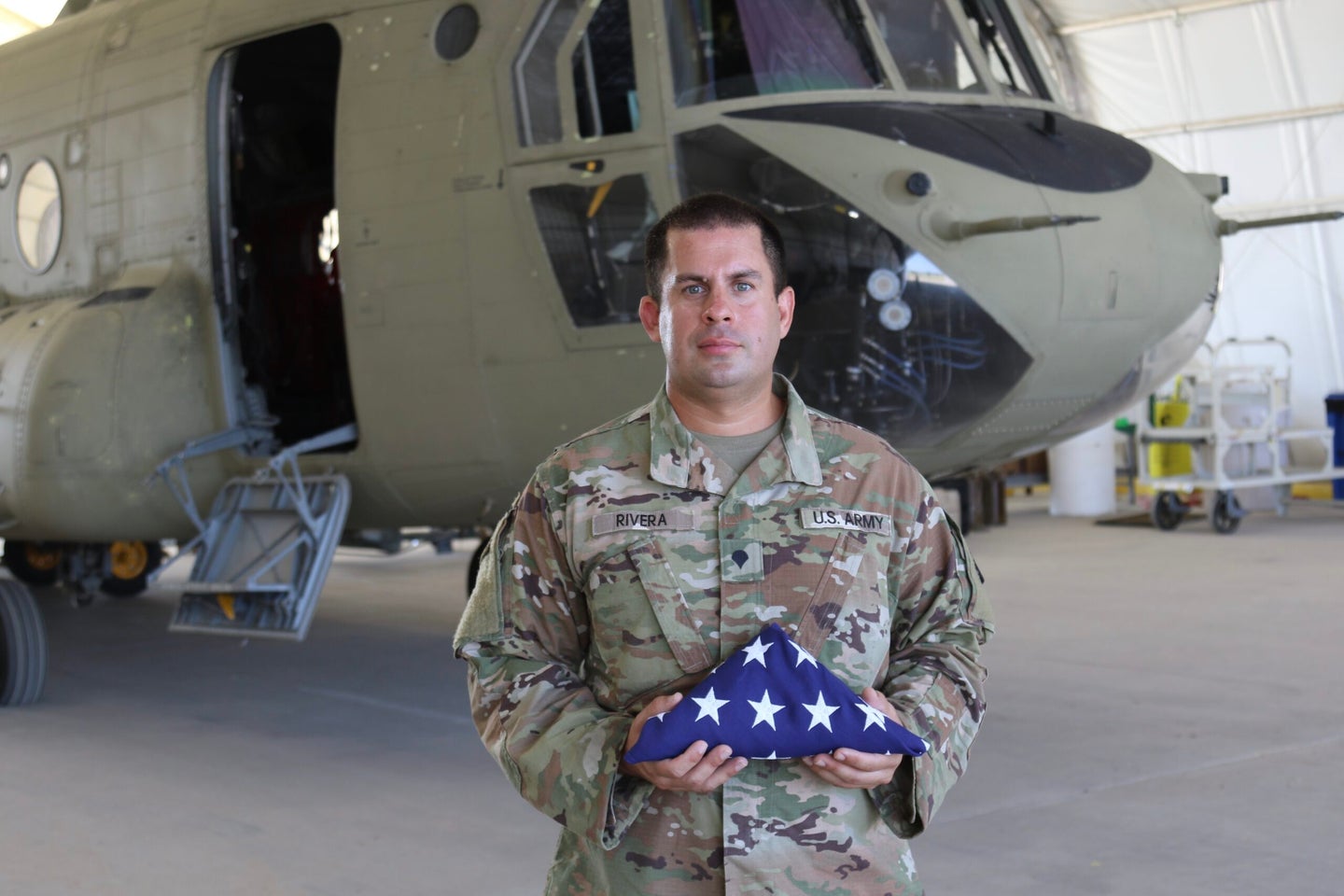 Rivera, along with his wife and two young children, immigrated to the U.S. in 2017 and now calls Greenville, Michigan home. He described the ceremony as an important stepping stone.

“We immigrated to the U.S., it may sound cliche, but to pursue the American dream. Life, liberty and the pursuit of happiness,” said Rivera. “I was a business owner back in Honduras and the economy was completely tanking. When the opportunity to move to the U.S. showed up it was a no-brainer to drop everything and come over.”

The oath was administered in the presence of Rivera’s fellow Soldiers in Bravo Company. Many of those Soldiers, including 1st Sgt. Ross Houck, Rivera’s company first sergeant, had never seen a naturalization ceremony before and described it as humbling.

Completing the Oath of Allegiance, the final requirement to become a U.S. citizen, proved challenging due to COVID-19 restrictions and pre-deployment training requirements.

Representatives from U.S. Citizenship and Immigration Services were not traveling to Fort Hood and Rivera could not be sent to the nearest field office without breaking quarantine. After several requests for an exception to policy and coordination efforts with several officials at USCIS, an agent was authorized to travel to Fort Hood and administer the oath.

“It was very important to me and the other Task Force Roadrunner leaders to complete the citizenship process prior to deployment,” said Maj. Michael Bertsch, Rivera’s company commander. “I didn’t want him to leave without receiving the citizenship he earned.”

According to the USCIS, a service member who serves honorably, especially during times of armed conflict, may be eligible to apply for naturalization under special provisions of the Immigration and Nationality Act.

However, Rivera describes serving in the U.S. military as something he always wanted to do growing up. After he moved to the U.S. it made all the more sense to pursue that dream and join the Michigan National Guard.

“It is particularly important to me because serving in the military for the country that has received us with open arms, and giving back to the community that has welcomed us, is a really big deal to me,” said Rivera. “Even more so as a citizen of this beautiful country.”

According to his leaders, Rivera already lives by the Army values, selflessly serving this country and setting an example for other Soldiers to emulate.

“I see him every day working his job, never complaining and always with an awesome disposition and great attitude every day,” said Houck. “As he fights for his country, the best send off we could do was to start his [overseas] service as an American.”

According to Houck, several hurdles had to be jumped to make the naturalization ceremony happen. He credits Bertsch for going “the extra mile” and they both say it was worth it to recognize Rivera.

“I am very happy for the Rivera family and grateful we were able to make him a citizen before our departure. He willingly raised his right hand and took the oath to defend our great nation,” said Bertsch. “Spc. Rivera is an outstanding Soldier and I am proud to serve with him.”