He Was A Terp For Recon Marines In Helmand. Now He’s Headed To The School Of Infantry

For three years, Mohammad Nadir served alongside infantry and reconnaissance Marines, police advisers, and coalition forces in volatile districts like... 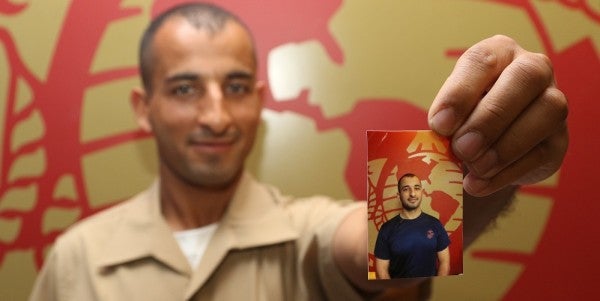 For three years, Mohammad Nadir served alongside infantry and reconnaissance Marines, police advisers, and coalition forces in volatile districts like Kajaki, Lashkar Gah, and Sangin in Helmand province, Afghanistan. As an interpreter for U.S. service members at the height of the war in Afghanistan, he considered himself the “ears and eyes of ISAF.”

Now, he’s a Marine, and he’s headed to the school of infantry to become a grunt. But it was a long road to get there, growing up in a war-torn country that few people are ever allowed to leave.

It was the strong presence of U.S. military during his childhood that inspired Nadir’s dream to become a Marine.

“My mom would tell me stories about the military when I was younger, my father was a cop with the Afghan police . . . and many people welcomed the Americans, even during times of strife,” Nadir said in an interview released by the Marine Corps.

Nadir poses with a Marine police mentor team in Afghanistan while he was serving as an interpreter.U.S. Marine Corps photo by Sgt. Jessica Quezada

After he graduated high school in Kabul, Nadir got word that private companies were hiring Afghan locals to work as linguists.

“This was my chance to be around the military,” he said.

He left for Sangin in October 2011, and for the next several years served as an interpreter for Marines in Helmand under I and II Marine Expeditionary Forces, 1st and 3rd Reconnaissance Battalions, and alongside Marine advisers attached to an Afghan National Civil Order Police team, Marine Sgt. Jessica Quezada told Task & Purpose.

Related: She Was Born In A Russian Prison And Became A US Marine. The Infantry Is Next »

“I told my family it was a nice job and would be safe, but they didn’t know it was nothing like that,” Nadir said of Helmand. “It was the worst place.”

But, it was under fire that Nadir truly came alive.

“When I saw the Marines fighting I knew I wanted to do that,” Nadir said. “They are the brute force for a military and I respect them a lot for what I saw those Marines do in Afghanistan.”

Nadir was lucky to get a Special Immigrant Visa for his work as an interpreter, and he arrived in the United States on Nov. 10, 2014, the Marine Corps’ birthday.

Three years later, he’s a Marine, and the infantry is next. Nadir enlisted in February and graduated from Marine Corps Recruit Depot San Diego, California, on May 26, with orders to Camp Pendleton San Diego’s School of Infantry West.

“I told my family I was going to come to America and become a Marine, so I did,” Nadir said.