The Top 5 Reasons Soldiers Really Join The Army, According To Junior Enlisted

Americans join the Army for plenty of reasons: for country, family, and honor. According to a new study of enlisted... 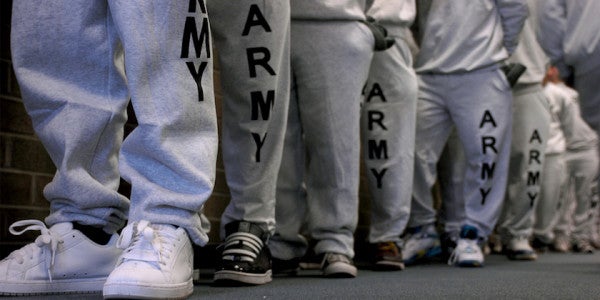 Americans join the Army for plenty of reasons: for country, family, and honor. According to a new study of enlisted soldiers, however, a core motivation is relatively simple: for money.

A RAND Corporation exhaustive survey of 81 soldiers between E-1 and E-4 suggests that the choice to enlist is influenced by two overlapping factors: institutional ones like family and duty, and occupational ones like professional development and job stability.

In other words, the overwhelming majority of respondents had economic reasons for joining up; for most enlistees, it seems military service is a job first and a calling second.

According to the RAND study, the primary motivations for enlisting include:

Ironically, those soldiers who cited occupational incentives for enlisting over sacred ideals tended to stick with military service in the long haul, though soldiers who saw the Army as a career “tended to cite institutional motives with more frequency than those who did not,” the researchers write. Just because the military service is a job and not a calling doesn't mean enlisted soldiers aren't planning on kicking ass at their job.

Well, maybe not too much ass. When asked why they chose to pursue the Army over other service branches, a few soldiers responded that they “felt the Marines were 'way too hardcore,'” according to RAND. “One respondent recoiled from joining the Marines after his Marine recruiter became overzealous and tackled him during a game of ultimate Frisbee.”