8 Military Punishments That Wouldn’t Fly In The Civilian World

If you screw up your cashier duties at McDonald’s, chances are your boss won’t smoke you, unless he wants a … Continued 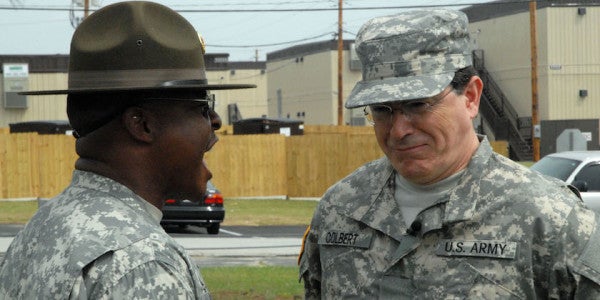 If you screw up your cashier duties at McDonald’s, chances are your boss won’t smoke you, unless he wants a harassment suit brought against him. In the military world, we live by a different set of rules and laws, one in which we forfeit many of our previously enjoyed rights and freedoms. The U.S. armed forces follow the Uniform Code of Military Justice, a set of legal conventions that was born from the 69 Articles of War in 1775. Although our current rendition of the UCMJ wasn’t signed into law until 1950 by President Harry S. Truman, it sure feels as though some of the punishments contained within its bindings date back to colonial times.

Here are eight punishments that wouldn’t fly in the civilian world.

Confinement on “diminished rations” — or a substantially limited amount of food — may be imposed as punishment upon personnel in paygrade E-3 or below, attached to, or embarked in a vessel.

2. Forfeiture of all pay and allowances.

In the civilian world, your place of employment can’t garnish your wages, dock your pay, or force you to work without pay for poor performance. In certain instances, if you lose your company a ton of money or break some expensive equipment, you can be found liable, but your employer is required to pay you for all of the hours that you work. In the military, however, the UCMJ allows the military to take the pay and allowances of someone who's been given nonjudicial punishment or who’s been found guilty in a court-martial.

4. Hard labor without a full trial.

A summary court-martial is not a full trial, but you can be sentenced to hard labor regardless. Minor offenses such as being late for duty, sleeping on watch, disobeying orders, providing false information, and damaging government property could earn you this punishment. Although the consequences of these actions are arguably much more serious in the military, this kind of punishment wouldn’t fly in the civilian world.

5. Searched without a warrant.

All of your activities on base are subject to scrutiny — and all of your possessions are subject to warrantless search. From a dormitory inspection to a car or house search, military members don’t have a reasonable right to privacy so long as they’re on government property.

A captain’s mast is the Navy’s nonjudicial punishment discipline procedure. In the Marines, it’s referred to as “office hours,” and in the Army and Air Force it’s simply called “Article 15.” The worst-case scenario in a captain’s mast is that you’re publicly embarrassed and given punishment while your sins are read in front of your peers and superiors. Whether or not a captain’s mast is public or private is up to the commanding officer, regardless of your preference in the matter. Retired Marine Lt. Col. James Weirick, a former JAG officer, said in an interview with Task & Purpose that a slightly similar equivalent in the civilian world is a National Football League’s public announcement of a player’s iniquities.

If you’re in military lockup, you’re entitled to three meals a day, but they can be MREs, or a “similar substitute,” according to Army Regulation 27-10. The highly caloric meals are only meant to be eaten for a maximum of 21 days — so pray your sentence isn’t longer than that.

If your address starts with USS and you find yourself in trouble with your command — whether justified or unjustified — you cannot refuse nonjudicial punishment. Called the “vessel exception,” the Navy can deny the right to refuse NJP to any member attached to a ship.