The Air Force Is Looking For A Few Good Gamers

Editor’s Note: This article by Oriana Pawlyk originally appeared on Military.com, the premier source of information for the military and veteran community. Forget... 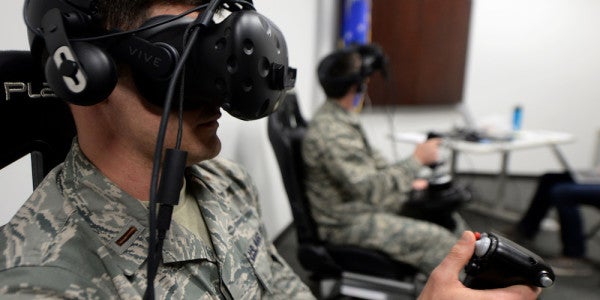 Forget the Xbox. The U.S. Air Force wants kids to play a video game to help it locate future airmen.

The strategy is “taking advantage of something that's already been invented. It's called the Internet, and it's called big data,” said Lt. Gen. Steven Kwast, head of Air Education and Training Command.

The service has been collecting data to develop an online game for high school kids. They would play anonymously, identified only by an IP address, Kwast said. The service would collect data without violating their privacy, he added.

“If they're interested in flying and they see this game the Air Force has … if I find a 15-year-old kid that's just brilliant, I'll probably send a message to that IP address saying, 'Go tell your mom and dad that you are special and that I will offer you a $100,000 signing bonus and I will send you to Harvard for four years for free,' ” Kwast told reporters during a breakfast Thursday in Washington, D.C.

Officials are leveraging data and infrastructure to build a first “iteration of that game around this summer, and we can start playing with it,” he said.

“The game gives me insight into their insight, their skill, their knowledge, their attributes and their characteristics,” Kwast said. “And I don't need to know their name, but I know that 'IP address so-and-so' has really got unique skills to be a helicopter pilot, or an F-35 pilot or whatever it may be, and then I can start recruiting that person … marrying up their propensity, their passion and their talents with my requirement.”

Data to create the game has been coming from the service's pilot training next initiative, which explores how pilots can learn and train faster “by using existing and emerging technologies that can decrease the time and cost of training,” but with the same depth of understanding to produce quality pilots.

That includes using virtual reality simulation and artificial intelligence to get airmen in an aircraft faster, with the potential of expanding the streamlined training.

Analysts are watching how some airmen learn visually and others audibly.

For example, Kwast said some airmen may learn faster by reading something for themselves instead of looking at something presented to them, such as a diagram.

“This data is pouring into the game that will asses because this is a journey from accessions,” he said.

But the game won't necessarily apply only to pilots.

“I can have maintainers now that can be just a general mechanic,” Kwast said. “For every person doing a job in the Air Force, this applies.”

He gave a nod to futurists and science fiction writers — such as Orson Scott Card, who authored “Ender's Game” — who've pushed leveraging simulation and innovative technologies.

Card “could see technology, could see its implications to human nature, and on what you could do if you could measure talent like that,” Kwast said.

“The same is happening today. It charges the imagination of people that actually build the future,” he said.