This Is How Marines Learn To Shoot

All Marines, regardless of job or rank, have one thing in common: They know how to shoot. Marksmanship is integral... 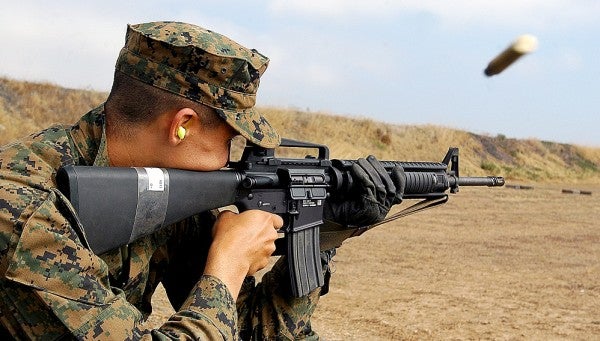 All Marines, regardless of job or rank, have one thing in common: They know how to shoot.

Marksmanship is integral to a Marine's career; it’s a point of pride and impacts your eligibility for promotion. In asymmetrical warfare, knowing how to shoot can mean the difference between life and death.

Recruits learn the basics of marksmanship during the second phase of their training and combat marksmanship in third phase, but long before they fire a round, they spend endless hours learning proper weapons handling, dry firing their weapons from different shooting positions.

During week six, called grass week, recruits head to the rifle range where they are introduced to their primary marksmanship instructors, who teach them the different firing positions: prone, sitting, kneeling, and standing.

“That is going to add onto what the drill instructor taught them, and teach them the fundamentals. It’s a big deal,” says Phillips, explaining that no matter the job, “you need to know how to shoot that weapon.”

By the time recruits start dry-firing their weapons, or snapping in, they’ve already learned proper weapons handling, how to clean and maintain their weapon, and of course, the four safety rules: Treat every weapon as if it were loaded; keep your finger straight and off the trigger until you intend to fire; never point your weapon at anything you don't intend to shoot; and keep your weapon on safe until you intend to fire.

Unlike first phase, which is defined by endless screaming, knife hands, and incentivised training, the drill instructors are a bit more restrained during second phase, explains Phillips.

“Their whole focus at that point is marksmanship,” says Phillips. “It’s easier. You want them to shoot good, to be relaxed. A kid who’s tensed up, nervous, and scared isn’t going to shoot well.”

During grass week, recruits spend hundreds of hours snapping in on targets and getting used to the different firing positions. They practicing their breathing, trigger control, and learn how to zero their rifles.

When they shoot their weapons the following week, they’re ready.

It’s not until week seven that recruits finally shoot their weapons. They spend Monday through Thursday shooting live rounds at targets 200, 300, 500 yards away, in each of the different firing positions. The Marine Corps is the only service that requires its recruits to fire from distances as far as 500 yards.

Phillips says that it’s often the recruits who have never shot a weapon before who perform best, which he attributes to the fact that they’re a blank slate, and don’t have any bad habits. Not to mention, they might be a bit nervous shooting for the first time, so they pay attention to everything being taught.

On Friday, recruits must qualify with their weapons by earning a minimum score of 190 during table one of the Marine Corps Rifle Qualification. Commonly called rifle qual, the test has two portions, table one, which involves firing from 200, 300, and 500 yards, from the standing, kneeling, sitting, and prone, and table two, which is focused on combat marksmanship.

For those who don’t pass table one, they’ll have the chance to shoot again the next day, and if they repeatedly fail, they’ll be recycled, which means going back in training and starting all over again at the beginning of phase two.

“This is what they thought they wanted when they came to recruit training,” says Phillips.

During basic warrior training at week nine, recruits spend every day outside, learning basic combat survival skills like land navigation, maneuvering under fire, and combat marksmanship, during which the recruits engage targets at close range in full body armor.

“Now on this course of fire, they’re learning the rules of engagement and escalation of force and how to put an enemy down from 25 yards away,” says Phillips.

“You’re trusting him with those 30 rounds to do the right thing and be smart with the weapon,” says Phillips, who explains that combat marksmanship involves a lot of quick firing drills, and therefore, a strong emphasis on weapons safety and handling.

The recruits conduct the second portion of their rifle qual at this time, table two, and add the scores from both together. If they have a combined score of 305 or better, they qualify as a “Rifle Expert,” 280-304 means they qualify as a “ Rifle Sharp Shooter,” and 250-279 qualifies the recruit as a “Rifle Marksman,” the lowest score obtained.

“This is real life, this what you’re going to do, this is a firefight right here, you and an enemy, he’s trying to kill you and you’re trying to kill him.”