It’s only fitting that aspiring Marines should have a chance to meet the Corps’ most recent legend. On March 24, … Continued 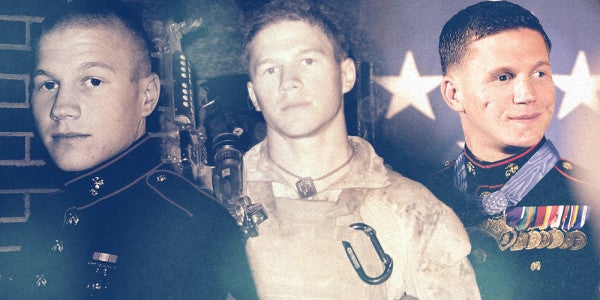 It’s only fitting that aspiring Marines should have a chance to meet the Corps’ most recent legend.

On March 24, Medal of Honor recipient Kyle Carpenter posted a photo on Twitter commemorating the seven-year anniversary of the day he arrived at Recruit Training Depot Parris Island, South Carolina.

The photo was from an earlier visit Carpenter made to the training depot on Nov. 6, 2015, when he spoke with Platoon 1000 from Bravo Company, 1st Recruit Training Battalion, Recruit Training Regiment.

Standing in his old squad bay, Carpenter spoke to the recruits about the importance of earning the title of U.S. Marine and said he respected their willingness to raise their right hands to volunteer serve, according to Capt. Gregory Carroll, a Marine Corps spokesman.

Carroll told Task & Purpose that Carpenter cautioned against complacency, telling recruits that the transformation doesn’t end at graduation, but they have to continually improve themselves to be ready to support the Marines to their left and right.

Extremely honored to speak to recruits that, seven years later, stand in the same exact squad bay as I did. @USMC pic.twitter.com/5RjTHh35UP

Sgt. Bryan Nygaard, a public affairs Marine assigned to Marine Corps Recruiting Station Baltimore, was in the same platoon as Carpenter during recruit training and described the Medal of Honor recipient as a “tough, determined warrior with a servant’s heart,” who had a strong desire to lead.

“He was a short, little squad leader. Drill instructors called him ‘mini-me,’ with more heart than the rest of us,” Nygaard told Task & Purpose. “The one thing I always tell people is that the Kyle Carpenter you see today is the same Kyle Carpenter we all knew in Platoon 1040.”

Carpenter enlisted in 2009 and deployed to Afghanistan in 2010 with 2nd Battalion, 9th Marines, as a rifleman. Carpenter and Lance Cpl. Nicholas Eufrazio were manning security on the perimeter of Patrol Base Dakota in the Marjah district in November 2010 when enemy insurgents launched a daylight attack on their post.

When a grenade landed inside of the Marines’ sandbagged position, Carpenter shielded Eufrazio from the blast, absorbing the impact. Both men survived despite severe injuries and Carpenter endured a lengthy recovery process. He was awarded the Medal of Honor on June 19, 2014.