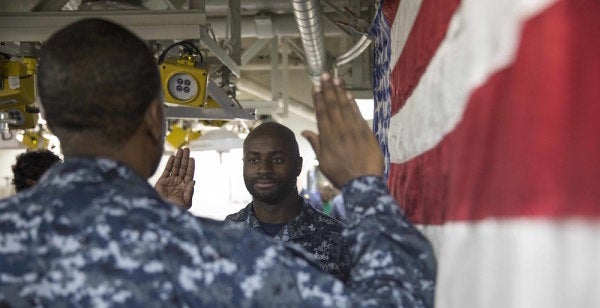 The Navy is planning to decrease 14 selective reenlistment bonus levels and eliminate six skills from the list of bonus-eligible careers, the office of the Chief of Naval Personnel announced on June 17, a move that seems counterintuitive to a branch that claims to have a renewed focus on reenlistment.

The coming update to the Navy’s December Selective Reenlistment Bonus plan, expected to take effect on July 21, will establish a moratorium on award level increases or additions as the branch explores more effective ways to “maintain acceptable manning levels in critical skills,” according to the announcement.

During fiscal year 2017, the NDAA set the Navy's authorized end strength total is 323,900. For 2018, the branch is hoping to reach 327,900, according to a statement from the Chief of Naval Personnel offices

Several anonymous officials told Navy Times that the branch’s end-strength number could rise as high as 350,000, but Chief of Naval Personnel spokesman Lt. Cmdr. Nathan rejected that target, telling Task & Purpose that while “there is not currently an end goal final end strength number that I’m aware of, we do expect end strength will grow commensurate with force structure changes.”

“We are concerned about the potential impact on future fleet manning if we don't take proactive action now to keep more sailors at sea to finish their first sea tours and thus avoid a significant decline in fleet manning,” Christensen said. “Our number one priority is to keep the Fleet manned at the highest levels we can.”

It’s unclear why the Navy is cutting bonuses across these 14 levels considering the branch is hoping to add 4,000 sailors to its ranks by 2018, and the branch’s decision appears to buck a trend among the other service branches when it comes to retaining top talent.

The Army is attempting to sweeten the deal for reenlistees and new recruits by offering massive reenlistment bonuses and retirement incentives in order to retain and rebuild its force structure. And while the Air Force cut careers eligible for bonuses, but its budget for bonuses grew from $226 million in 2017 to $250 million in 2018.

However, the CNP memo says that Navy officials believe they can still fill crucial roles and carry out their missions. If necessary, they may use their discretion to request increases in enlistment bonuses, which CNP will take under advisement.

“There is not currently an end goal final end strength number that I'm aware of, but we do expect end strength will grow commensurate with force structure changes,” Christensen said.