What Soldiers In The Infantry Go Through To Earn Their Title

If you’re going to be an infantryman in the Army, then you’re headed to Fort Benning, Georgia. In the Army,... 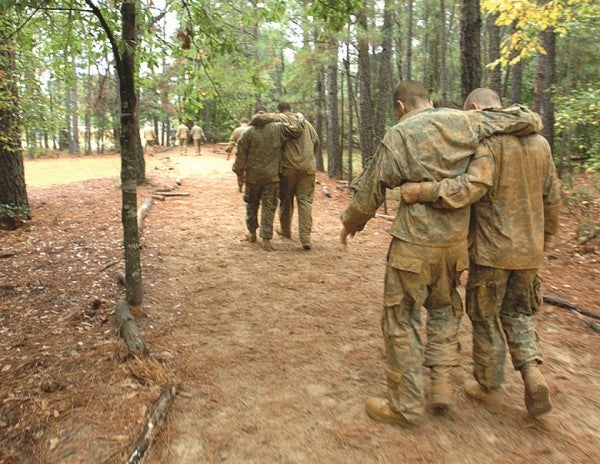 If you’re going to be an infantryman in the Army, then you’re headed to Fort Benning, Georgia.

However, Fort Benning is the only place where soldiers are transformed into infantrymen. The soldiers at Benning go through a rigorous skills-based course that lasts 14 weeks and is referred to as one-station unit training, or OSUT. The training begins before dawn and ends in the late evening, six days a week with Sundays reserved for religious services.

The training cycle is broken into five phases. The first three focus on instilling discipline and building the basic skills that soldiers will rely on during the last two phases, explains Staff Sgt. Kristopher Jackson, Fort Benning’s drill sergeant of the year.

Related: This Is What Privates Go Through During Army Basic Training »

The drill sergeants at Fort Benning are all infantrymen and have stood in the same place as the privates they’re tasked with training. Jackson has deployed twice to Afghanistan and once to Iraq, and is a combat veteran who has attended numerous advanced training schools.

During the first three phases the soldiers train on a range of weapons systems, from the M4 carbine, to heavy weapons and grenades. They conduct physical readiness training daily and learn the fundamentals of fireteam tactics.

Task & Purpose spoke with Jackson about the final training exercises and rites of passage soldiers must complete before earning the title of infantryman.

“The four and five phase is where they start learning what it means to be an infantryman,” Jackson explains. “They know what’s going on. Those nine weeks have molded them as soldiers. They have the standards of discipline, so it really makes four and five all about refining them. They’re physically fit’ there’s not as much fatigue, and they push a lot harder.”

In phase four, the soldiers begin to train for urban operations. During this time, they are taught how to clear a room, as well as operate in a densely populated area and as a squad.

“Now, they’ve developed from buddy team into a fireteam, so now we can start implementing squad tactical training,” says Jackson, referring to the two-man and four-man teams the soldiers worked in previously.

The training in urban combat and room-clearing the soldiers receive is critical.

“What we’re doing is, with this training, if they deploy to an urban environment and they move in and may have to use hand-to-hand combat, we’re teaching them to get in there and secure the room,” says Jackson.

On the tenth week of training, the soldiers operate in four-man teams and stack up outside of a building. Inside, a drill sergeant wearing padded armor, gloves, and a helmet is waiting for them. The soldiers must communicate in silence, using hand and arm signals and then enter the room and take down their drill sergeants in close combat.

“What we do is we put the suits on and when they come in we cause confusion and either lock down the first person, grab hold of him, to see how the rest of them react,” says Jackson. “The biggest thing they need to do is they need to take out that threat. They need to move through the room and get in as quickly as possible and lock it down.”

In phase four of their training, soldiers also learn to build, or rather, dig and fortify defensive fighting positions, the proper way to react to enemy contact, how to disengage or break contact, how to attack and move as a mounted, meaning in a vehicle, or a dismounted squad.

The last hurdle is the field training exercise.

The final exercise occurs at the end of phase five and is known as the field training exercise, or FTX, during which the soldiers incorporate all they’ve learned in the previous 14 weeks, from small-unit tactics, mounted and dismounted engagements, to basic and advanced rifle marksmanship.

“What usually happens is the commanders of each company will develop a plan on what they want trained while we’re out at each training area,” says Jackson. “They’ll pack their rucks with a specific packing list and they’ll move out, and we’ll go to a different training area where we’ll conduct different exercises over everything they’ve learned.”

Over the course of their training, the privates conduct physical readiness training, hand-to-hand combat training, and march endlessly. They begin at two miles with 35-pound packs, not counting ammunition, body armor, and weapons systems, and end at 15 miles, with more than 60 pounds of gear in their pack.

After the FTX, they make their way to Honor Hill.

“They roadmarch into Honor Hill, at this time, most of the privates know what is coming,” says Jackson, referring to the final rite of passage for the future infantrymen. “It’s a ceremony that only infantrymen do. It’s done at night, when they’re in the final stretch there’s people there to cheer them on, kind of welcoming them into the brotherhood.”

The soldiers make their way through plumes of smoke and pass a gate bearing the phrase: “From this gate, emerge the finest soldiers the world has ever known. Follow me.”

When they reach Honor Hill, they receive their canteen cups, which are then filled with “grog” — a mix of Gatorade, water, and dry ice, but the privates think it’s booze. It’s not.

Afterward, there’s a ceremony where the drill sergeants award the soldiers the coveted badge of an infantryman showing a pair of crossed rifles. The following week, they receive the blue cords that only infantrymen wear on their dress uniforms during a graduation ceremony.

“It’s different than any other place,” says Jackson. “There’s a lot of history behind it, a lot of pride. It’s something I know most drill sergeants take serious when they’re training these privates.”