How To Survive Benning Phase Of Ranger School

When you hear graduates reminiscing about Ranger School, most people talk about how tough Mountain Phase was, or how they … Continued 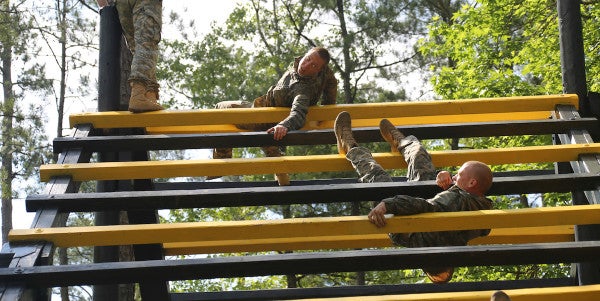 When you hear graduates reminiscing about Ranger School, most people talk about how tough Mountain Phase was, or how they almost failed in Florida. However, Benning Phase, the first of the three phases, is no walk in the park, either. In fact, over 60% of Ranger candidates fail this phase. But if you can adjust to the reality of not eating, not sleeping, and getting the piss smoked out of you while waiting to perform some difficult and often humiliating tasks, you have a pretty good chance of making it through.

Benning Phase includes everything that happens on Fort Benning in Georgia. As I wrote earlier, making it past the initial, physical Ranger Assessment Phase at Camp Darby is tough (statistically, completing RAP is the best chance of successfully completing Ranger School). But RAP is only the first part of Benning Phase. Ahead lies what many Ranger School grads colloquially call “Forest Phase” — small unit patrolling and leadership evaluations based out of Camp Rogers. Rogers is also where candidates encounter the infamous Darby Queen obstacle course.

Prepare to be humiliated.

The Darby Queen is the most intimidating version of every other military obstacle course you’ve ever seen. Afraid of heights? You will be tested. Clumsy? Prepare to be humiliated. Have less than exceptional upper-body strength? Your weakness will be exposed. Whatever your flaw or fear, it will be put on full display for all to see.

But don’t lose heart: if you’re physically capable of passing RAP, and don’t have a debilitating fear of heights, you’re capable of finishing The Darby Queen. Be prepared to fail one, maybe even two obstacles. The Darby Queen is just another mental challenge, something to test your ability to encounter failure and keep moving forward.

Related: How to ensure a ‘first-time go’ in Ranger School »

By far the most important practical component of Benning Phase is small unit patrolling. The theory you read in books goes into practice: over and over and over again, you will conduct Battle Drills 1A (Squad Attack), 2 (React to Contact), 3 (Break Contact), and 4 (React to Ambush) until they became second nature. Then, the field exercise tests leadership and comprehension, individually and as a group.

As with everything else in Ranger School, it’s difficult to learn this stuff while struggling to stay awake, so be sure to arrive prepared. You should already know your battle drills coming into Ranger School — this should be straightforward for any infantryman, officer or enlisted, as it’s simply conducting the dismounted battle drills necessary for the job. It’s also important to understand whether you’re a “smart Ranger” or a “strong Ranger.” Smart Ranger’s plan and direct, or help those who need the assistance. Strong Rangers carry more than everyone else. If you’re neither, be ready to do a bit of both.

Maintain situational awareness of your responsibilities and everyone else’s.

Memorizing your own responsibilities within the group and executing those responsibilities is crucial. But it’s also important to know the responsibilities of your teammates, so you can help out when necessary. For example, the radio telephone operator, or RTO, has fairly light responsibilities: Stay with the senior leader at all times, maintain communications with higher, and call reports up. While this can be physically taxing, it doesn’t require much brain power. If the RTO also knows the responsibilities of the senior leader, he can help that leader fulfill his many tasks and obligations. When I went through in 2006, everyone got at least two shots at passing patrols in Benning Phase as either a squad leader or a team leader. Everyone also got a turn at being RTO. When the RTO knew how to conduct a raid or reconnaissance, he became critical to ensuring success for the whole team.

Assuming that you’ve mastered leadership tasks (and by the end of this phase, there’s no reason you shouldn’t have, through practice and execution), one of the greatest challenges in this part of Benning Phase is political. You wouldn’t think politics would play a role in Ranger School (or combat, for that matter), but it does, and I learned this the hard way.

One of the last and most anticipated events of Benning Phase is a massive cookout on the night Ranger students return to Camp Rogers from the final evaluation, during which they can buy and eat as many hot dogs, hamburgers, and desserts as their shrunken stomachs can handle. Full of food and anxiety, Ranger students rank each of their fellow squadmates in terms of loyalty, dedication, and suitability to carry on as Rangers and leaders. In other words, this is where the spotlighters and douchebags get their due. Following the evaluation, the Rangers are sent on to the next phase, moved to a different unit if “peered” negatively, “recycled” to the beginning of the phase, or, depending on the circumstances, kicked out of the school entirely.

If possible, attend Ranger School with people you already know.

This brings me to the final piece of advice. To minimize the threat of getting peered out by people who dislike you, attend Ranger School with people you know, preferably in your peer group. Try to stick close together when the companies are selected. My initial squad consisted of a couple lieutenants (one of whom I knew), a staff sergeant from Special Forces, a few lower enlisted “Bat Boys” from Ranger Regiment, and some enlisted soldiers of varying ranks. I got along very well with the Rangers, well with the lieutenants, and, as I learned on the last day, not well with anyone else. Later on, in my regular units, I got along well with just about everybody. But in Benning Phase I didn’t take cultivating friends and allies seriously enough, and paid the price — I was peered out by the Special Forces sergeant and his enlisted allies. I didn’t make the mistake of taking my fellow students for granted again.