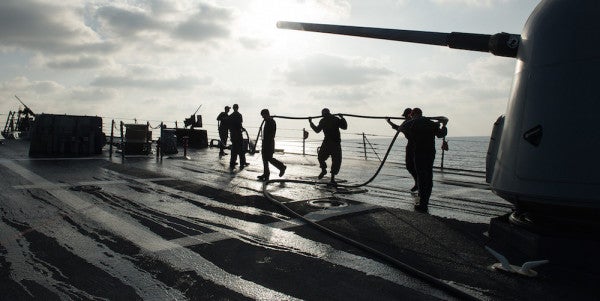 The recent storm of essays, articles, and blog posts (serving primarily as open vent sessions from junior officers dissatisfied with their lots) has blown the most recent wave of resigning officers away from safe, service-enhancing, disruptive thought and into “here there be dragons” conversations. It appears the fundamental misunderstanding of these disillusioned writers concerns their unique value, which they seem to hold hostage in their eleventh-hour protests. If a rock adrift in space believes itself to be a star, and within this fictionalized framework of the rock’s artificially created parallel universe, chooses to go supernova and explodes in the greatest show since the big bang, is anyone in the real world actually expected to care?

The genesis of this problem lies primarily outside of military control. Mainstream western society increasingly tells its youngest members, through media messaging and the influence of its educators, that they have unlimited potential to immediately impact the world around them. While noble on the face, this idea fails to underline — as evidenced by the word “immediately” — the labors and struggles necessary in turning potential energy to kinetic in furtherance of specific goals. Personal faults are seldom highlighted, strengths are often overamplified and every minor exertion, no matter its direction or end result, is praised and held as proof positive of significant future achievements. To this end, the entire academic community — ranging from primary schools to institutions of graduate education — artificially creates expectations of spontaneous greatness, while simultaneously eroding the reasonable anticipations of required effort. As a result, college graduates increasingly expect to be immediate captains of their industries, without spending any amount of time in the proverbial mailrooms.

The military is absolutely not immune to this blatant pandering to the egos of our youth. In order to attract the nation’s “best and the brightest,” service academies and Reserve Officers' Training Corps programs have increasingly been forced to take up the national refrain. Every midshipman and cadet can now reasonably expect to have drummed into them the idea that they “will be the future of the Navy/Army/Marine Corps/Air Force/Coast Guard/Nation.” Historical figures are held aloft as worthy of immediate emulation by these military apprentices uniquely on the strength of decisions made far later in their careers, and with little mention of their earlier struggles. Forty years before there was an Adm. Chester Nimitz, there was an Ensign Nimitz, who knew so little about ship handling that he ran his ship aground. Before Adm. “Bull” Halsey became a legend of naval aggressiveness, there was an Ensign Halsey who was so unnerved by an explosion on the USS Missouri that he became superstitious for life. “Beautifully unique rainbows” of naval genius never simply come into being. They are manufactured through years of selfless effort and sacrifice by their aspirants; the first of many debts all great military men and women pay.

The military is a structured system built on the construct of risk management dictated to it by its ultimate client, the American taxpayers. While the national media glorifies startup miracles, in which twenty-something college dropouts come up with multibillion-dollar ideas and revolutionize the world, each of these stories pushes to the sidelines the other 99.9% of cases in which college dropouts come up with lackluster ideas and fail miserably, thereby condemning themselves to impoverished lifetimes of regret. A lack of understanding on the fundamental differences between the cost-risk calculations of young startups with those same calculations in regard to national defense seems to further the disillusionment of many junior officers. A system of guaranteed returns, though built on the back of heavy attrition in the junior ranks, is evidently more preferable a means of national security than a risky strategy of untested ideas, even if giving voice to these ideas furthers the ambitions of the normally muted.

This policy approach is equally visible in the private sector, where mid-sized and larger corporations hardly deviate from fixed business models, often accepting enormous losses in entry-level talent to generate repeatable and stable returns. A look at the attrition statistics for the “Big Four” public accounting firms mirrors the military’s human resource difficulties.

I am also resigning, after six deployments in seven years, two of which were on “shore duty,” and a total of 14 years in the service. Any impressions that I was ever a “unique butterfly” just needing room to spread my wings were quashed early on in my career. Waist deep in sewage during a ruptured pipe casualty on my last shipboard tour, looking around at people who understood the value of effort without overt validation, I realized that in spite of the overtures of my various professors, the inflated fitness reports, and a litany of awards, I was exactly where the Navy needed and wanted me to be at that point in my career. If I believed that I was something overly special, to be fawned over and pampered by the Navy, who else would be in that sewage-filled space in my stead? Wouldn’t that person have as much of a right to believe the effort beneath his or her abilities? In a Navy full of self-serving and entitled officers, who would be left to actually do the work?

I’m not getting out because I’m operating under the illusion that anywhere else will be easier, or that by transitioning to the civilian world, I’ll somehow miraculously receive my just rewards. I certainly don’t believe that my resignation will change anything within the Navy, except that someone else will step in to take up the strain I’ll leave behind. My reasons for picking up the winnowing oar are my own, and selfish, and so no different than anyone before me or later. I don’t have any regrets, no parting shots to fire across the Navy’s bow, no systemic issues to which I feel my voice would add any great insight. I’ll miss the friendships formed in adversity, even if that adversity was manufactured by internal bureaucratic inefficiency. I’ll miss the travel, even if it meant long days away from loved ones on missions I didn’t, and don’t still, fully understand. Most of all, I know I’ll miss meeting, and working with, people who long ago cast aside their inflated ambitions in favor of doing a thankless job to the utmost of their abilities.