3 Ideas For Fostering Innovation In Your Workplace

Innovation is a skill that service members and veterans can develop with training. It’s not genius, luck, or unique to... 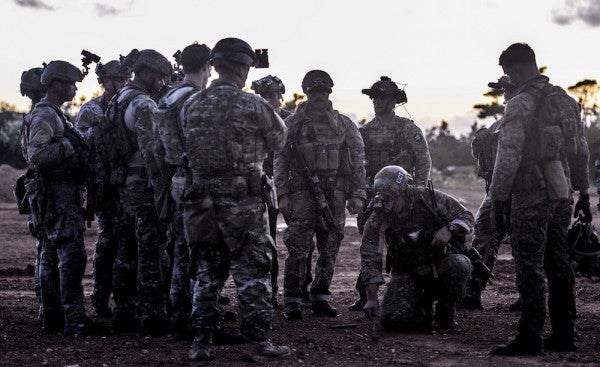 Innovation is a skill that service members and veterans can develop with training. It’s not genius, luck, or unique to Silicon Valley. It’s something at which we can each get better, whether we’re adapting to the 21st century security environment or the global economy.

In a previous post, I described the foundation of an “innovation training plan” for service members and veterans. The foundation has three parts: a “Growth Mindset,” esteem for failure as a means to learning, and rapid prototyping.

Apart from this foundation, though, what does “training” for innovation actually look like? What can we do today to start becoming better innovators? The steps below transform the vague idea of innovation into something tangible. If repeated enough, the steps culminate in a habit of innovation, a dynamic way of thinking to match the dynamic world we live in.

Start small: Pick one (and only one) innovation project.

Experiments drive innovation. Experiments are tangible, small tweaks to concrete ideas, projects, or products. “Being more innovative” is a worthwhile goal, but it’s not practicable as long as it’s a vague, general commitment. We need something specific in mind in order to start the experimentation process.

At the Air Force Academy, I teach a course titled Innovation in Government. The goal of the course is to understand how government bureaucracies become more innovative, but the question, “How do governments innovate?,” is so broad that it’s meaningless. For the question to make sense, my students and I have to focus on the tangible world. We’ve discussed lighthearted issues like cadet hunger when the chow hall is closed. (The issue is unresolved — as far as I know, “too bad” is still the standing policy.) We’ve also discussed more serious issues like increasing cadet volunteer hours or improving first-year training. Experiments in these contexts can be as simple as a survey: “What would it take for you to volunteer?” Or offering a menu of volunteer opportunities to see which the cadets actually choose.

Whatever the innovation project, it just needs to be specific. It also helps if it’s relatively unimportant, because the autonomy to experiment is easier to come by the fewer the number of people are paying attention. Late-night meals or volunteer opportunities attract less attention than strategic policy.

This first step will feel inconsequential. Most first steps in training usually do — the first run in preparation for a marathon is only a few miles. Eventually, though, the process of innovation becomes ingrained as a way of thinking, changing how we see everything in an organization. The second step below helps explain how that way of thinking becomes habitual.

Half bake the first step.

“Experiment” can conjure images of sophistication — expensive laboratories and academic formality. For the innovator it should mean the opposite: Try something quick to learn as fast as possible. We can ensure fast learning by aiming for half-baked ideas — 50% solutions — as opposed to fully polished products.

Half-baked ideas may feel wrong to military members, who expect the best of themselves. It sounds like an excuse for “sandbagging” or cutting corners. But half-baked does not mean half effort. It means stopping halfway to get feedback, then starting again.

A series of 50% solutions produces a better result in the long run. An example from far, far away shows why. Dan Ward, author of “Build Droids, not Death Stars,” argues that one of the lessons from the repeated failure of the Dark Side is that big projects — Death Stars — inevitably miss something when they are unveiled at the last minute. Droids miss things as well, but they are designed to be easily updated.

Back in this galaxy, half-baked ideas stand in for drones, and the measure of how innovative we are is the time it takes for a half-baked idea to receive feedback and start the process again. The quicker the loop the more innovative the process. Tightening the loop is a matter of tweaking the environment we work in, which is the purpose of step three.

The “rapid experimentation” of the previous step, in practice, means regularly and frequently sharing ideas with each other. The physical layout of the office — the location of desks and common areas — should force run-ins throughout the work day; coffee break discussions should be more norm than exception.

An example of workplace design for regular encounters is Facebook Corporation’s headquarters. Their Menlo Park 20 building is renowned for its art, arcade games, and free food, but perhaps its most innovative design is its floor plan. Workspaces are laid out on a single floor in a giant warehouse-like building. No walls separate the workspaces except in meeting rooms where privacy is necessary. Even Mark Zuckerberg, the founder and CEO, has an office with glass walls that anyone on the floor can look into. If a Facebook employee wants to walk to a meeting room or lunch area, they have to walk throughother’s workspaces. Every break from work is a chance to run into someone who can help with a problem or give feedback on an idea.

The Facebook approach isn’t unique to Silicon Valley. In his recent bestseller “Team of Teams,” retired Gen. Stanley McChrystal describes the open environment he built at Joint Special Operations Command. When he took command, offices were divided into functional areas and physically separated from one another. Communication was deliberate, not serendipitous. McChrystal realized that fighting a worldwide terror threat required constant communication; cubicles clumped into different divisions only got in the way. He built an open floor plan and overlapped functional areas so they were forced to run into each other.

The same idea of ease of communication should apply electronically as well. Tools like Slack make for easy communication on any platform, from computers at work to smartphones, and combine the best aspects of email and instant messaging with the ability to post documents and presentations. Combined with a rearranged office, a tool like Slack can help make idea sharing regular and frequent.