James Mattis, the Marine Corps general-turned secretary of defense, is known for many things, including his prolific reading list. We... 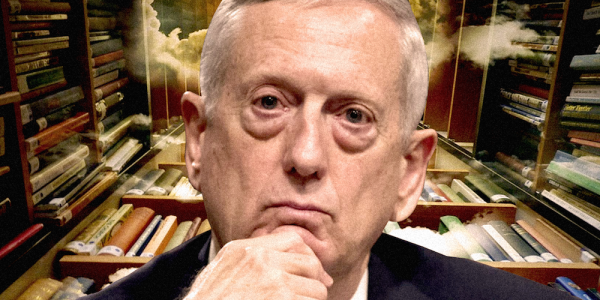 James Mattis, the Marine Corps general-turned secretary of defense, is known for many things, including his prolific reading list. We know everyone jokes that Marines can’t read, but Mattis has probably perused more books in a year than most people manage in a lifetime.

He sat down with Foreign Policy and listed some of the books he believes that every military leader should read.

“You need to have that broader reading as you grow and personally develop so you can actually do the job as a military officer,” he said.

It’s a hefty list, but here are 30 of Mattis’ favorite books.

One Bullet Away: The Making of a Marine Officer by Nathaniel Fick (2005)

Dereliction of Duty: Lyndon Johnson, Robert McNamara, The Joint Chiefs of Staff, and the Lies that Led to Vietnam by H.R. McMaster (1997)

It takes big brass ones for a field-grade officer to write a book about how America’s generals should have told their Vietnam-era leaders that the war was dumb. But that’s what Maj. H.R. McMaster did in his 1997 doctoral dissertation. Now, McMaster, who pioneered some of the Army’s biggest counterinsurgency efforts in Iraq, is a three-star general and President Trump’s national security advisor. Who says dissent in uniform is a bad idea?

Military Innovation in the Interwar Period by Williamson Murray (1996)

Before the First Shot Is Fired: How America Can Win Or Lose Off The Battlefield by Tony Zinni (2014)

Hannibal is typically the leader remembered as one of the world’s greatest military leaders, but Liddell Hart suggests his adversary, Scipio Africanus, was the better general. For those who study military strategy, it is Africanus whose stratagems and ruses still remain useful today.

My American Journey by Colin Powell (1995)

The Forgotten Soldier by Guy Sajer (1971)

Gates of Fire by Steven Pressfield (1998)

So you saw the movie “300”? It’s not even the best fiction about Sparta’s epic stand of 300 soldiers against the 2 million Persians at Thermopylae. That honor goes to Pressfield, who translated his experiences as a Marine into 480 B.C. Sparta in this novel. It’s been providing in-the-field moto for grunts for almost two decades.

Duty: Memoirs of a Secretary at War by Robert Gates (2014)

The Lessons of History by Will and Ariel Durant (1968)

The Greatest Raid of All by Lucas Phillips (1958)

Grant, who served in the U.S. Army in both the Mexican-American War and the Civil War, saw his career culminate in two terms as president of the United States. Written for money in Grant’s old age, his autobiography describes his battles and his foes in surprisingly clear, thoughtful language.

March of Folly: From Troy to Vietnam by Barbara Tuchman (1984)

The Guns of August by Barbara Tuchman (1962)

Rise and Fall of the Great Powers by Paul Kennedy (1987)

When Adm. James Stockdale was shot down and became a prisoner of war in Vietnam, he attributed his survival to studying stoic philosophies, particularly Marcus Aurelius’ “Meditations.” Aurelius, the Roman emperor, wrote his simple rules for living by candlelight, and they were never meant to be published. But they’ve been a source of strength for warriors and everyday civilians ever since.

Defeat into Victory by Viscount Slim (1956)

When he was running a guerrilla army, Mao Zedong said, “We have no use for asinine ethics.” Princeton philosopher Michael Walzer uses this quote as a jumping-off point for his book, which asks: How do you square the strategic, sometimes dirty demands of war with the ethical demands of being a not-terrible human? Philosophy is rarely so accessible — or so important for the warfighter to grasp.

War, Morality, and the Military Profession by Malham Wakin (1979)

For Country and Corps: The Life of General Oliver P. Smith by Gail Shisler (2009)