5 Ways New Leaders Can Change The Military For The Better

It seems almost everyone thinks they’re the smartest and most innovative person in the room. Oftentimes, the same people who … Continued 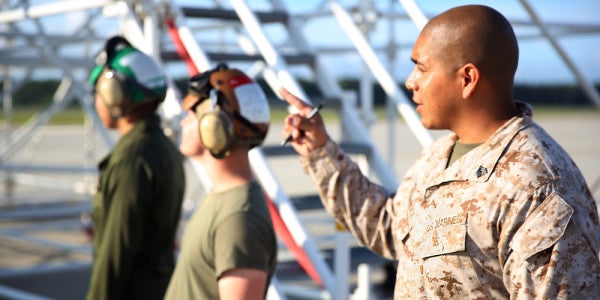 It seems almost everyone thinks they’re the smartest and most innovative person in the room. Oftentimes, the same people who claim to have the best ideas are the same ones who complain about how nothing ever changes. As with everything in life, in the military there’s a big difference between saying something and actually doing something.

“Innovation” and “entrepreneur” have recently become buzzwords du jour in the military, after having been part of the civilian lexicon for years. Everyone talks about how the military needs new ideas. That’s great, but if you work at DARPA, you already know innovation — the creation of new ideas that improve devices or processes.

The place where the most innovation is needed isn’t necessarily at the top level or in think tanks or labs. It’s at the mid-level and ground floor, where every day, someone is saying, “Why are we still doing it this way?” That’s where the rubber meets the road, and innovation can make a meaningful day-to-day impact.

All too often, though, that day becomes a military “Dilbert” cartoon. We get so caught up in the daily grind, doing our work and complaining about our work, that we forget that the possibility of change exists.

Mid-level officers and noncommissioned officers — you are in a position to make some changes or influence those who do. Here are a few recommendations to start with.

The military runs on plagiarism like Rand Paul discussing genetics. Need to write a letter of instruction? Grab one from last year and change the date. Need to brief a mission? Grab another guy’s PowerPoint and update the graphics.

That might be good enough to get by, but doing the same thing as the last 10 guys isn’t exactly making you a catalyst for change, is it? Start with a blank sheet of paper every now and then and you’ll be shocked at ideas you come up with, and the results.

Talk is cheap. Bosses hear complaining and whining everyday. Most of it is about things that won’t change. Most of it has no solution to whatever problem is so horrible. You want to stand out? Make a comprehensive written proposal advocating a solution. You think you’re too low on the totem pole to do that? Most officers in charge or commanding officers who get a well-thought-out, reasoned plan from a junior service member and not just a “Why the hell is this so jacked up?” will be so bowled over, they can’t help but at least try it out.

3. Know when to ask permission and when to beg forgiveness.

Sometimes the biggest obstacle isn’t your commander, it’s the one guy in the staff meeting quoting an ambiguously worded paragraph in a regulation and expressing concern over how a higher headquarters or inspection team won’t like your proposal. Do your homework. If your idea is within regulations, know the appropriate section verbatim. Too many good ideas are torpedoed by naysayers who only vaguely know the rules and use them sloppily to avoid having to change. If appropriate, call a contact at the higher headquarters or the inspection team to make sure your idea is cleared hot before it gets hit by a blue falcon in front of your boss. Sometimes, you have to just do something without asking. But even if it’s definitely the right thing to do, you still have to make sure you know your stuff.

Not every great new plan will allow a test run, but many will. If you’re a pilot with a new idea, try it in the simulator first before you propose burning jet fuel on it. If you’re a ground pounder, wargame or “red cell” it. If you’re in admin, see if you can run with your new idea for tracking travel claims for a couple of weeks to see if it works better. Whatever it is, first document how the system currently works. Then try your idea and track how it affects the results. People don’t always like to tip over whole apple carts on faith. But sometimes they’re willing to chuck at least a couple apples in the street to see if it works.

You want to make a difference? Things aren’t always going to work perfectly. They don’t work perfectly to begin with, but the guy doing the same thing as the last ten guys gets to say, “This is the way we’ve always done it.” That won’t apply to you, Mr. Innovator. Your idea is out there to sink or swim on its own. If you are known as a hard worker, you’ll survive either way. Still, doing things differently has its risks, be they catastrophic failure or only damaged pride, but that’s true anywhere, not just the military. If the change is worth doing, then it’s worth the risk.

The man won’t know about your ideas unless you show him your ideas. Before you go off saying the military is immune to change, be the change.