In his 20-year career as a Navy SEAL, Brian “Iron Ed” Hiner rose through the ranks to become one of … Continued 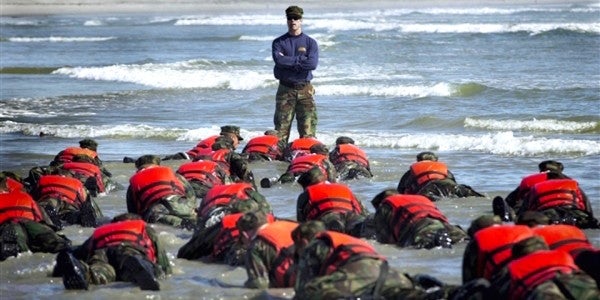 In his 20-year career as a Navy SEAL, Brian “Iron Ed” Hiner rose through the ranks to become one of the most experienced SEAL trainers in the history of the organization. This month, he released his first book, “First, Fast, Fearless: How to Lead Like a Navy SEAL,” a detailed account of the leadership lessons that he both learned and taught while serving as head of all basic and advanced SEAL training on both coasts.

A leader of leaders, Hiner talks straight and to the point about the no-shortcuts path to success that is forged on the SEAL Teams. Here are some of his book’s most surprising, unconventional, and inspiring insights.

A team of analysts was once hired to profile the ideal SEAL candidate, and some of their findings were surprising. Surfer dudes in the military? Absolutely, writes Hiner, and especially if they hail from the North Pacific Coast. Cold-water surfing builds the physical and mental toughness needed to succeed in austere environments. Wrestling? Same deal: It demands strenuous and painful training in a sport that requires drive, adaptability, innovation, adaptive mindset, high intelligence, and team orientation, all traits that are sought and selected for in SEAL training. And chess players? They excel as SEALs not only for the ability to plan strategically while thinking a few moves ahead of the competition, but also for their ability and willingness to interpret the rule book as a guide rather than a Bible when searching for a solution. In this equation, Hiner explains, a problem solver who can see ways to bend rules without breaking them makes a great innovator, and the ability to innovate is part of what makes a great SEAL.

2. Life isn’t fair, nor should training be.

Sometimes bad things happen to good people, and nowhere is this more true than on the battlefield. To prepare men for this eventuality, and to abide by the warrior’s ethos that you “train the way you fight,” SEAL trainees are taught early on that sometimes life just isn’t fair. This is handed down in the form of a completely arbitrary and unearned “RAW deal,” random ass whipping, which is also, fittingly, war spelled backwards.

While students are hammered by the entire training staff with a barrage of extra-physical challenges to complete, they are forced to employ the “first-strike mindset” that they’ve been taught; that is, to act decisively and assertively, at every moment and in every situation while always maintaining a creative, energetic, and positive approach. The goal here is to instill in trainees the type of mental toughness that allows for resilience, teamwork, proactivity, and positivity — even in the face of grave and unfair challenges.

3. All warriors live by an ethos.

Knights Templar, Samurai, the Spartans — all of history’s great warrior cultures leave behind the legacy of their ethos, or the guiding principles by which they lived, fought, and died. Hiner was part of the team of SEALs who in 2005 went to great pains to craft an ethos that adequately captured all aspects of what being a leader and warrior means to them, and now this painstakingly crafted SEAL ethos is introduced to all new recruits on day one.

From that day forward, trainees are responsible for upholding their ethos in training and in action, and they constantly evaluate one another against it. Hiner suggests that every person — not just SEALs or military service members — needs an ethos to live by. He beckons that we ask ourselves: How do I define myself? My team? My role? My tasks? My strengths? My differences? Why I should be respected? And, most importantly, how am I going to earn that respect? Answer those questions for yourself, your team, or your business, and you’re on the path to creating your own ethos.

4. Redefine your notions of authenticity.

Perception is reality, writes Hiner, and leaders need to manage the way in which they are perceived. This means focusing closely on everything from physical appearance to verbal and written communication — so important on the SEAL teams that all officers and enlisted SEALs actually study and learn public speaking. In this context, “wearing your heart on your sleeve” is not always a good thing; in the heat of the moment, people are watching you and waiting for your next move. Gen. George Patton understood this, which is why he made sure that his general officers never dressed more warmly than the troops. It’s the same reason why the company chief executive officer should never show up at the factory wearing a gold Rolex, Hiner points out. You can feel the right things on the inside all day long, but if your actions are failing to convey your good intentions to your team, then you’re failing to lead effectively. Brand yourself accordingly.

5. Responsibility and accountability are not the same thing.

When something goes wrong, and it always does, such uncertainty in most organizations devolves into finger pointing. Of course, it’s always necessary to find the cause first if you want to mitigate future negative outcomes, but when it comes time to assign blame, a good leader will step in and take the heat. Accountability is where the buck stops, and in the SEAL teams, if you’re a leader, you’re accountable for everyone in your care. No matter who did what, the buck stops with you. Making excuses only slows down the momentum of the organization, and when your focus is mission first, team second, and individual third, there’s no question what the right move is here. The takeaway point? There are no bad staffs, says Hiner, just bad leaders.

6. Humor is one of a SEAL’s strongest weapons.

Even the original Naked Warriors, a.k.a. the underwater demolition team of World War II and precursors of today’s modern SEALs, were not immune to an appetite for dark humor. Hiner cites as evidence the Marines who landed on the beach of Agat, Guam, to find a sign reading, “WELCOME MARINES AGAT USO—2 blocks Courtesy UDT 4.”

This isn’t all just fun and games, he says, it’s actually a potent weapon against fear. The brain’s executive system is responsible for a whole host of functions that a warrior needs to be able to call upon at a moment’s notice — innovation, problem solving, planning, and ethical behavior, to name just a few. Fear inhibits the executive system, but guess what inhibits fear? Hence the senior enlisted advisorof the BUD/S Hell Week that took place over Halloween 2001, who introduced a pumpkin named “Charlie” into the class of trainees. Charlie was delicately cared for by the team throughout Hell Week until his untimely death in the surf zone during a paddling exercise, at which time Charlie was given a whole-hog Viking warrior send off to Valhalla, burning pallet and all. The lesson? Humor can go a long way toward learning to “embrace the suck” and rise above even the greatest of challenges.

7. SEALs train for failure, but not to fail.

Anyone who as ever “maxed out” as part of their weight-training program might already be familiar with this concept: To understand the boundaries of your capabilities, you have to find your breaking point. The trick to this, writes Hiner, is to push yourself to tackle bigger problems than you can handle. The difference between “training to failure” and maxing out at the gym? When training to failure, you never ever quit, or drop the barbell, but rather push yourself to the brink of failure and then still find a way to come out on top. Physically exhausted, with low ammunition, in a compromised position; it doesn’t matter, you keep fighting until you win.

Anyone familiar with the story of Operation Red Wings, portrayed in the book and movie “Lone Survivor,” knows what this looks like in practice. In three words: “Make it happen,” says Hiner.