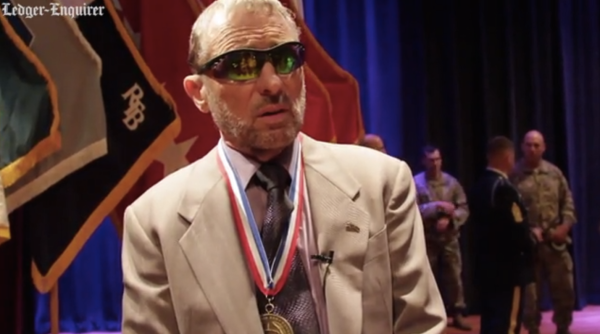 Thursday afternoon in Fort Benning’s Marshall Auditorium, no one could see more clearly what it meant to be an elite U.S. Army Ranger than retired Capt. Stephen C. Maguire.

While serving as a recon platoon leader in Vietnam, he was seriously wounded, losing his eyesight on Nov. 6, 1969, just six months after he graduated from Ranger School.

He was hospitalized for 17 months and soon after he was medically retired. Maguire was at his parents’ home feeling the Ranger patches on T-shirts as he was going through his stuff. His mother saw him and reacted out of frustration.

“She said, ‘Ranger, that’s what got you into this mess,’” Maguire said. “I turned to her and said, ‘Well, Ma, you got it half right. Ranger did get me into this. And it’s the only thing that is going to get me out.”

Maguire was one of 16 men inducted into the Ranger Hall of Fame. There are more than 70,000 soldiers who have earned the prestigious Ranger Tab since the early 1950s. Less than 370 of them are in the Hall of Fame, which was established in 1992 and is housed at Camp Rogers, the headquarters of the Airborne and Ranger Training Brigade.

Former Columbus mayor and retired Col. Bob Poydasheff was inducted as an honorary member for his more than 50 years of service to Rangers, their families and the U.S. Army Ranger Association.

All of them had an inspirational story, but it was Maguire, wearing sunglasses and using a white cane to navigate the stage, who had the audience hinged on every word.

“It is often in life what we tell ourselves that determines the outcome,” Maguire said. “… I was 24 years old and decided I was on an extended night mission. I am 70 now and I am still on that mission.”

Maguire became a counseling psychologist in mental health, alcohol addition and substance abuse in Ireland and Germany after leaving the Army. He currently lives in Oklahoma.

Tucker, near the end of the three-hour program, was the only inductee not wearing a coat and tie. The retired lieutenant colonel was wearing his 1970s era uniform top that fit nicely.

“When you pin that tab on, you are cursed for the rest of your military career,” said Tucker, a colorful character who commanded the Florida Ranger camp during the Vietnam War. “It can curse you in a good way because it can give you the opportunity to rise to the highest levels or it can cause you to get court-martialed because you will be expected to be the leader. And if you are leading, in many cases, you take the first round.”

Tucker, 83, lives on the Gulf Coast near the the Florida Ranger camp on Eglin Air Force Base.

Poydasheff, a Columbus attorney still practicing in his mid-80s, was instrumental in doing the legal work to form the U.S. Army Ranger Association Inc. and the National Ranger Memorial Foundation.

“When I was informed of this, I was humble,” he said, “and I can guarantee you that I am not worthy of this, but I am proud that some thought I was.”