Army Captain Gives Everything She Has To Earn A Coveted Decoration

The military is presently under a national spotlight regarding women in combat, with branches testing how women can physically handle... 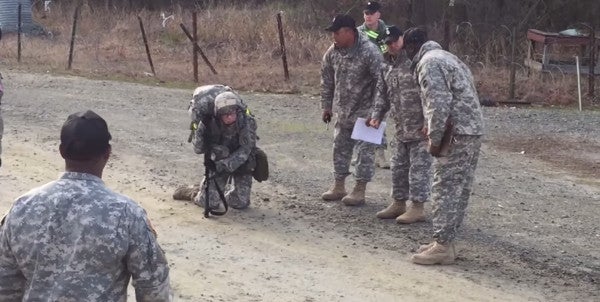 The military is presently under a national spotlight regarding women in combat, with branches testing how women can physically handle grueling physical standards associated with combat arms training. A video going viral adds some interesting context to that. The video shows a U.S. Army captain, who is a woman, completing a 12-mile ruck march on a course that is open to women and outside of the discussion on women in combat arms — the Expert Field Medical Badge course. The competitive decoration is open to soldiers in the medical field and is one of the toughest decorations to earn.

In the video, Capt. Sarah Cudd grinds out the final steps of a 12-mile ruck march that had to be completed in three hours as part of the qualifications for the course. It’s one of the most grueling courses in the Army; a 2013 Army report describes the success rate as just 17%. Cudd, an Army veterinarian, joins those ranks in an extremely motivating fashion.

The video was posted to Facebook April 28, by Capt. Lloyd Mason, whose Facebook page describes him as the program manager for the Expert Field Medical Badge course at Fort Dix, New Jersey. The video has been shared more than 22,000 times since.

It’s fiercely motivating — Cudd can be seen gritting it out just a few dozen feet from the finish line. She crumples to the ground from exhaustion twice, and is slow to rise each time. The determination, however, is palpable, as is the energy and support from the onlooking soldiers who surround her. The crowd’s cheers grow as Cudd gets nearer to the finish line. When she finally crosses it, she’s surrounded by supportive soldiers; the cheers are deafening, and she immediately collapses. The time on the clock reads 2 hours, 46 minutes, and 53 seconds. She had three hours.

The U.S. Army’s Public Health Command shared the video to Facebook days later, saying Cudd “shows us all what ‘never quitting’ looks like.”

Task & Purpose reached out to a former Army combat medic, Samuel Innocent, who served with the 10th Mountain Division in Fort Drum, New York. He described the course as, “The second-hardest badge in the Army to get outside of the Expert Infantryman Badge.”

CPT Sarah Cudd from Public Health Command, Fort Knox is only 1 of the 46 candidates who earned the EFMB yesterday at Fort Dix, NJ..27 April 2015. This is her last few seconds of the 12 Mile Foot March. The Foot March is the last event of the Expert Field Medical Badge (EFMB), and must be completed within 3 hours. If you want it, you have to go get it. Watch this video. This EFMB candidate wanted it, and she got it. It took heart, guts, determination, falling down and getting up, and a little motivation from the crowd to get across the finish line. Check this out.