‘The best America has to offer’ — For the first time ever, two sisters are Army generals 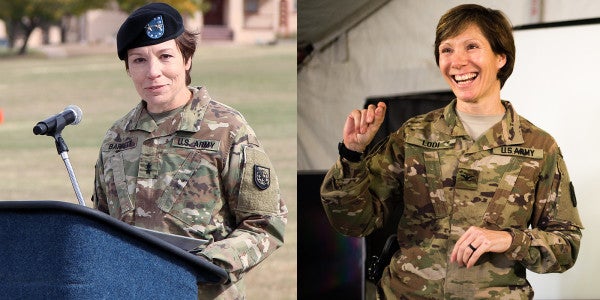 Members of the same family serving together isn't exactly a new concept — for many Americans, the U.S. military is a family business.

But not every family has two generals — and even rarer are those generals sisters.

Army Maj. Gen. Maria Barrett and her younger sister Brig. Gen. Paula Lodi are believed to be the first sisters to attain general officers' rank, a USA Today report says. Acting Secretary of the Army Ryan McCarthy told USA Today that the pair “represent the best America has to offer.”

Barrett, 53, and Lodi, 51, are from a family of five children, with a father who was an Italian immigrant and World War II veteran. Their father, Ruston, and mother, Clara, “stressed public service” to their children, according to USA Today.

Barrett said that her sister was the athlete, and she was more of a student — their brother, Rus, agreed.

“Maria would do something academically that just blew us away,” he told USA Today. “While Paula was doing something athletically, flipping off a diving board, before anybody else. They have just been a great source of pride and admiration our entire life.”

Lodi decided to go the military route after watching a documentary about the first women at West Point, USA Today reports. She declared to her father when she was eight or 10 years old that she would attend the academy as well, though she ultimately graduated from the Rutgers University ROTC program.

“If you're a little girl, and your father responds positively to something that you wnat to do with your life, you tend to grab ahold of it,” Lodi said.

For Barrett, it came down to the financial assistance she was going to get for school. While she intended on having a career at the State Department, the Army drew her in.

Now, Lodi is the deputy chief of staff for operations in the Army's Surgeon General's office; her sister commands the Army Network Enterprise Technology Command (NETCOM).

New Army Chief of Staff Gen. James McConville called Barrett and Lodi “exceptional, proven leaders who've distinguished themselves over the course of their career at various levels of command during multiple combat tours.”

The idea of two related women rising to the most senior ranks of the Army speaks volumes to how far women have come in military service — it was only four years ago that every combat role was opened for women. Just recently, the first female Airman earned her Ranger tab, and last year, the first female enlisted soldier did the same.

Barrett said when she talks to young soldiers, she tells them the reason she joined, “is not the reason why I stayed.

Our democratic experiment, even on its most imperfect day, is worth defending,”