The Marine Corps will not be able to stop suicides, sexual assault, and substance abuse in its ranks. Despite a... 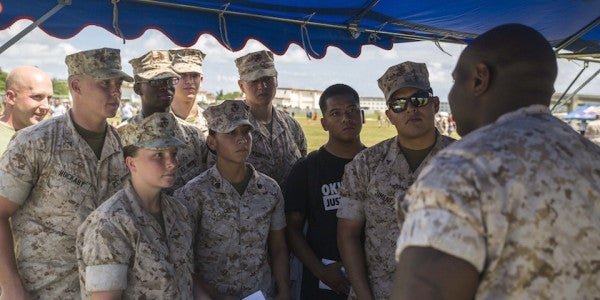 Maybe that statement deserves some qualification. The Marine Corps does, in fact, want to put a halt to these and other personnel issues that have metastasized in recent years. But the service’s primary objective is to fight and win conflicts, and preparing itself to do that is no simple chore.

In conflict with its core mission is a growing trend of dwindling time and a reluctance to prioritize objectives. Frankly, the Marine Corps finds itself with minimal institutional time even to care about addressing these issues, let alone facilitate effective solutions.

In 2011 and into 2012, the CNA (formerly “Center for Naval Analysis”) analyzed the rapidly diminishing “white space,” or free space, on the Marine Corps’ collective operational calendar. The study warned of numerous effects of calendars becoming so bogged down by layers of commitments. Put simply, overcommitment and a lack of prioritization have created a self-inflicted inertia whose outcomes have started to manifest themselves. The study noted a correlation between provost marshal-documented drug and alcohol offenses among Marines in units with more onerous overscheduling burdens.

How can the Marine Corps stop suicides, sexual assault, and substance abuse when its attention span is being squeezed by its induced constrictive commitments burdens?

Related: Why Congress Is Wrong For Shutting Down SOCOM Proposed Budget To Curb Suicide Rate »

In an April 2015 Huffington Post piece, entitled “Busy Is a Sickness,” pastor Scott Dannemiller outlines a case for the problematic nature of being busy of one’s own choosing. He argues people overtax their own organic resources for no other purpose than just to be busy. He shows how being busy, regardless of its efficacy, provides a self-perceived sense of worth or value.

Dannemiller cites a 2013 Boston Globe story by Dr. Susan Koven, an internal medicine practitioner at Massachusetts General Hospital, one of the country’s premier medical research institutions. Koven recognized a recent trend in patients suffering from an amalgam of undesirable symptoms linked to excessive, desired busyness. Dannemiller’s point is that we over-occupy our time with burdensome chores because we are, quite simply, afraid of our own selves, and fill our time with external pursuits to avoid introspection.

Marines and sailors with Headquarters and Service Company, Combat Logistics Regiment 27, 2nd Marine Logistics Group stand in a school circle as they are addressed by Capt. James S. Mackin, the H&S; Co. commander, after an eight-mile hike aboard Camp Lejeune, N.C., June 1, 2012. The purpose of the exercise was to improve the physical fitness and mental toughness of the troops within the command.Marine Corps Photo by Pfc. Franklin Mercado

He describes a study reported in the journal Science “that put individuals subjects alone in a room for 15 minutes. When asked if they liked the time alone or not, over half reported that they did not.” Later on, study directors gave subjects electric shocks. Most participants said “they would pay money to avoid the shock,”when asked.

Surprisingly, when these same individuals were left in a room alone again with the option to administer a self-induced shock, nearly half did so rather than sit alone in a room with their own thoughts. Just to make that clear: A large portion of the study group chose pain over solitude.

Right now, the Marine Corps has not merely to say that it cares on an institutional level about ending suicide, sexual assault, and substance abuse but to show it. That requires substantial time, but the message does not match the time required.

So what is the answer?

Simple: direct units to pause. Not an “operational pause” or a “safety stand down.”

Instead, completely shut down their calendars.

Stop for extended periods of time — weeks, if necessary. Demand that organizations pause for long periods of time from the business of preparing for war and conflict. And often throughout the year. No exceptions. Marines everywhere across the globe would cease operations to explore the pulse of their people.

These pauses would be “white space” railroad spikes slammed into organizations’ frenzied operational railroad tracks — one of the CNA study recommendations was an audit of training requirements in an effort to create free calendar space for small-unit matters, which is where much of the heavy lifting on these issues has to occur.

In that spirit, it’s time for a very deliberate approach that stops dancing around the periphery for a brutally honest look in the mirror about suicide, sexual assault, and substance abuse. In other words, it’s time to stop being so busy and devote the needed time be introspective. Solving these problems right now cannot compete in futility for time and attention in the Marine Corps’ self-imposed “white space” demolition.

It will be very unnatural and uncomfortable to stop routines for such lengths of time, sure; but that’s the point. The service has reached a place where it needs its subordinate organizations to have the freedom to sit down in a camp stool circle and face one another.

These pauses should be a time to have small-unit leaders do what they need to do: lead in problem-solving without concurrent responsibilities. Having Marines put a dead halt to their routines to be empowered to solve dilemmas that will continue to take an exponential toll on the Marine Corps is the beginning to understanding the ground truth of these issues. Similar types of grass roots efforts at preventing suicide are now ramping up on social media among veterans like the buddy checks and pushup challenges.

Without a shift in both messaging and deeds, the Marine Corps will continue to be its own worst enemy. So now is the time to stop, pause, be introspective, dig deep into the soul of the organization, and dislodge the answers — as painful and visceral as that might be — to find helpful outcomes to that which cripples the spirit of those who worked tirelessly to call themselves U.S. Marines. To do anything else would relegate each and every Marine to sit alone and administer self-induced shocks by choice.