During the presidential campaign, Donald Trump spoke somewhat disturbingly about waterboarding, saying, ”I love it, I think it’s great. And... 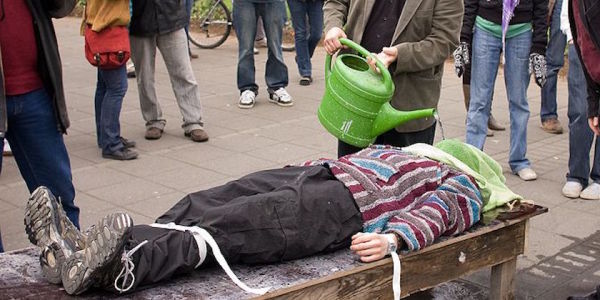 During the presidential campaign, Donald Trump spoke somewhat disturbingly about waterboarding, saying, ”I love it, I think it’s great. And I said the only thing is, we should make it much tougher than waterboarding, and if you don’t think it works, folks, you’re wrong.” Though Trump himself has backed off those words, Vice President-elect Mike Pence wants the administration’s opinion to be ambiguous. “We're going to have a president again who will never say what we'll never do,” Pence said. That ambiguity, deliberate or not, may create a tactical advantage for the United States, but it surrenders the nation’s moral advantage.

So, we are left to wonder how much of Trump’s campaign comments, such as promising to kill the families of terrorists, are just rhetoric. At the time, Trump said,”They won’t refuse . They’re not going to refuse me,” he said. “If I say do it, they’re going to do it.” He later walked back those comments, saying that the U.S. is “bound by laws and treaties.” and that “I will not order a military officer to break the law.”

But since the vice president-elect has just made it clear that nothing is off the table, it’s perhaps appropriate for service members to ask themselves what they will do if the administration does order military personnel to break the law. What are you prepared to do? What are you willing to be an accessory to? To live with? Most importantly, what consequences, if any, are you prepared to face for your convictions?

Torture is a violation of U.S. and international law, as is the intentional targeting of noncombatants. That means that irrespective of one’s personal opinions about such acts’ effectiveness, performing them makes one culpable. Whether or not you think it justified is irrelevant. It is undoubtedly criminal.

Since the U.S. is not a signatory to the agreement establishing the International Criminal Court, our own government would provide the only real enforcement of these laws. In other words, the only oversight or threat of sanction comes from the executive branch, i.e., the same branch that might be ordering “a helluva lot worse than waterboarding,” among other things.

The Bush administration redefined “unlawful combatant” and “torture” to facilitate practices that the administration thought would be effective. The Trump administration could redefine “noncombatant” similarly, to allow killing the relatives of terrorists. While the 2016 National Defense Authorization Act restricts interrogations to those practices contained within the U.S. Army Field Manual, that still allows for sleep deprivation and sensory deprivation. And it does not address the practice of extraordinary rendition, i.e., outsourcing torture to states that allow it.

Some, perhaps most, of these questionable or illegal acts would be handled by parts of the government that service members generally don’t see much of, such as the CIA. But military personnel may have to confront these issues, should the Trump administration’s ambiguity be more than campaign rhetoric.

When orders to violate the laws of armed conflict are given, they don’t come with letters signed by a commander, notifying service members that they are violating a law and asking them to sign at the bottom to acknowledge that fact before carrying out the order.

If you get such orders, and you’re very lucky, perhaps you’ll have the chance to consult with a military lawyer or discuss the matter with your commander, although undoubtedly an elaborate legal camouflage will exist to justify whatever questionable action is being ordered. Military lawyers and the chain of command alike would probably fall in behind the legal opinions of the White House Counsel, as they did during the Bush Administration. Failure to follow orders to participate in torture or kill noncombatants might have significant career and legal penalties, even if those orders were considered illegal right up until the day they were issued.

We may never know how many troops faced crises of conscience in regards to their treatment of prisoners, but as an example, a Navy nurse faced possible court martial, administrative discharge, and loss of his security clearance after refusing to force feed detainees held at Guantanamo. Only after the medical community at large spoke up in favor of the nurse were these proceedings dropped, after two years of investigation.

While force feeding detainees does not rise to the level of torture, the incident demonstrates the importance of individuals knowing and considering the legal and moral dilemmas they might be confronted with. That means that servicemembers must know their rules of engagement, know their detainee handling procedures, and actually pay attention to those Law of Armed Conflict briefs prior to deployments. The individual service member is the last line of defense against the U.S. committing war crimes.

If you’re serving in the military today, you’d better have prepared your answers for the questions about what you’re willing or not willing to do, especially if you’re in a leadership position, where you’ll be de facto answering for many others. There are many militaries throughout history that abdicated, both individually and collectively, their responsibilities to have those answers, with tragic results. The incoming administration seems likely to give our military a test on all of them.