An Army General Opens Up About Being Gay During DADT

When Brig. Gen. Tammy Smith joined ROTC to pay for school 1982, she never expected to spend the next 30... 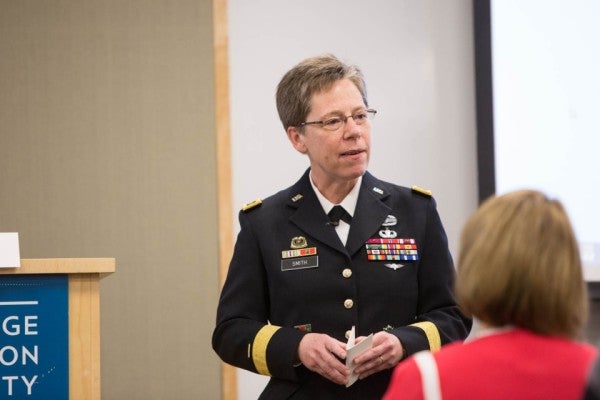 When Brig. Gen. Tammy Smith joined ROTC to pay for school 1982, she never expected to spend the next 30 years in military.

“I did not plan to make a career out of it,” Smith said in an interview with Task & Purpose. “But it turned out that I really liked being in the Army.”

She had planned originally to serve just four years to pay back her scholarship.

“I was trying to find a way to get out of Oakland, Oregon,” Smith said. “Like every kid wants to leave their small town, and I ended up coming into the Army thinking that the way out of Oakland was to get a college education.”

Since she commissioned in 1986, however, Smith has done far more than just make a career out of the military. She has made her mark by becoming a symbol of equality and diversity across the services.

As the first general officer to come out as gay while still serving, Smith has led the charge for equality, diversity, and integrity in the military.

Currently, she serves as the commanding general of the 98th Training Division. In this role, she is responsible for helping to sustain long-term readiness across the Army Reserve.

And while gender equality in the military has come a long way since she first commissioned, things have not always been easy for servicewomen, nor has it been possible to be an openly gay service member.

On Sept. 20, 2011, the Defense Department repealed its “Don’t Ask, Don’t Tell” policy on gays serving in the military. The doctrine both prohibited harassment based on sexual orientation, but forbade them from disclosing their sexual orientation as well.

For Smith, who believes in integrity above all, it was a challenge to balance her personal life with her life in the military.

“Serving with integrity is to always be truthful, and that you hold the purpose of your institution higher than your own personal self.”

When she first commissioned, and then for the 17 years when “Don’t Ask, Don’t Tell” was in effect, however, those two tenets were at odds for Smith.

She chose to put the Army Reserves as an institution before herself, subverting the truth about her personal life.

“I love this uniform and everything it stands for — the highest ideals of America,” she said. “Like thousands of gay and lesbian service members, I chose to set aside who I was for the privilege to serve in our armed forces.”

The policy that was in place prior to “Don’t Ask, Don’t Tell” entirely banned gays from joining the military, said Smith, adding that it made them feel like undesirable, lesser people.

“How I maintained my integrity is that I didn’t let that view, of what gay people were, take my dignity,” she said.

Smith instead found solace by acknowledging that her integrity came from within, rather than from the external standards set by a discriminatory policy.

“For me to have outed myself in order to maintain a sense of integrity by other people’s definition would have meant that I had to buy into the fact that I was a lesser person than my peers, and I never believed that,” she said. “I did not let the institution rob me of my dignity.”

However, that was before she met Tracey Hepner.

“It became increasingly difficult to compartmentalize my life after I met Tracey,” Smith said. “Before Tracey, I knew that the rules of the road were that I must never reveal my personal life to the military.”

When it appeared the only way for Smith to maintain the Army’s values was to sacrifice her personal happiness, she and Hepner together made the tough decision that she should seek retirement.

“I came to a point, I was a colonel at this time, where my personal values started to feel misaligned with institutional values,” she admitted.

However, in 2010, the chairman of the Joint Chiefs of Staff, Michael Mullen, gave a speech that convinced Smith that she should stay. He made a statement about feeling like service members shouldn't be put in a situation where they have to violate integrity just to serve, which restored her faith in the institution she had been serving for nearly 25 years.

On the day that “Don’t Ask, Don’t Tell” was repealed, Smith said that it was ultimately just another day for the military, but for her and the military LGBT community, it was a huge stride forward.

A study performed by UCLA around the 2010 census suggests that 2% of the military identifies as LGBT, or roughly 66,000 service members.

According to Smith, the repeal essentially took the constant pressure of hiding off of her shoulders, and allowed her to focus entirely on her work.

The repeal of “Don’t Ask, Don’t Tell” also meant that for the first time since Smith commissioned, upholding the integrity of the military didn’t mean sacrificing personal dignity.

In 2012, Smith was able to wed Hepner in Washington, D.C. Though the district legalized same-sex marriage in 2010, the couple had to wait until the repeal of “Don’t Ask, Don’t Tell” for the sake of Smith’s career.

She said, “After the repeal of ‘Don't Ask Don't Tell,’ I knew it was the right thing for my wife and I to be authentic about our relationship. If I chose to hide, what was I signaling as a leader to the rest of the members of the armed services who were gay and lesbian?”

Still, Smith remains very hopeful about equality, diversity, and integrity of the the future forces.

“I think that because of our values, there is great opportunity for all kinds of people to come into the military,” she said.

LGBT equality has made major strides since Smith commissioned, as has gender equality.

“It’s certainly different now as a general now in 2016 than it was as a second lieutenant in 1986,” Smith noted. “So I have benefited from the experiences of the women who have cracked a couple of glass ceilings ahead of me.”

However, she said, there are still obstacles, adding, “We have to keep our eye on a unconscious bias as we write our policies. Unconscious bias is when we assign people perhaps based on a gender role, and we don’t even realize that we’re doing it.”

As for young people looking to join the military, Smith thinks the military is a great place to look for equal opportunity.

“We already have this wonderful framework that is our military values that already tell us how we’re supposed to interact and behave towards one another,” she said. “We can have great equality; we do have great equality in areas in the military.”