This Is The Future Of The Air Force Reserve

In June, Lt. Gen. Maryanne Miller was chosen to serve as the first female commander of the Air Force Reserve … Continued 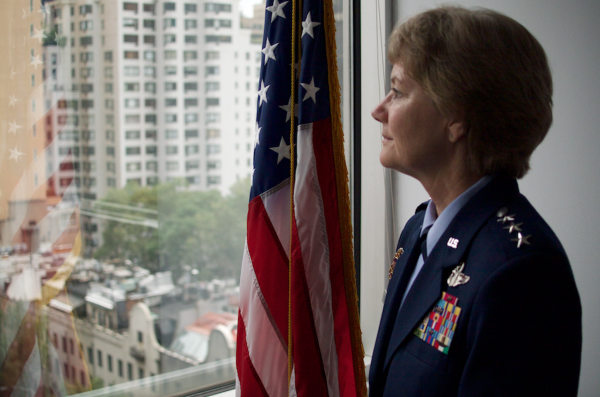 In June, Lt. Gen. Maryanne Miller was chosen to serve as the first female commander of the Air Force Reserve — a position that makes her one of the highest ranking women in the military. And over the four years she will spend in the post, she intends to leave her mark by making the Air Force Reserve a diverse component of the armed forces, with an important role for anyone who volunteers to join.

As she entered the New York City Air Force public affairs office conference room with a press officer and her sister, she wore a kind smile. She had piercing blue eyes and a firm handshake, and as she greeted me, she remarked that she was looking forward to visiting the 9/11 Memorial after the interview but was very happy to have had the chance to sit down with Task & Purpose.

Miller’s career spans nearly 35 years. She spent eight years on active duty before choosing to switch to the full-time reserves. A few years after that transition, Miller decided to open a restaurant and really take advantage of the reserve status to try her hand at dual military-civilian life.

“As I was in the reserves [I decided to] quit the full-time reserves piece, and expand even further into the private sector and open a restaurant in a resort community in Delaware,” she said.

On Sept. 9 — just two days before the 15th anniversary of the September 11 attack — Miller has her sights set on the Reserve’s future, but reflected on how 9/11 set the trajectory that brought her to this point.

At that time, Miller had been running the restaurant in Rehoboth Beach for about five years, and was toying with the idea of retiring from the military. After the attack, however, she realized that quitting the Air Force was not an option for her.

“We have really become truly an operational reserve since then,” Miller said. “I would say 20 years ago … when Saddam Hussein entered Kuwait … that is when transition began with the Reserve forces to go from a strategic reserve to an operational reserve. After September 11, that just increased the flame on that.”

Now, she said, the 70,000 men and women of the Air Force Reserve stand side-by-side with the active component around the globe to bolster mission readiness, and she is incredibly proud to be a part of that.

And as the active components for all the services decrease, the role of the reserves is expected to grow, which was both an exciting and daunting prospect for Miller.

Being that she is the first female to hold this position, Miller said she is looking forward to increasing diversity across the board. This year, the Defense Department took proactive steps toward creating a more diverse force by making the move to fully integrate women into all combat positions and allow transgender men and women to enlist or commission. But Miller knows there is still work to be done.

“We’re going after the last few doors, and we’re busting those doors down, and everything will be open,” she said.

This role, she added, was one she was able to obtain because the service members who came before her were encouraging and invested in nurturing talent of young airmen and women regardless of gender, race, religion, or sexual orientation.

“My path was paved by men and women before me and by great mentors who provided opportunities,” she said. That’s what I see as my role as, to provide as many opportunities for young people as we can.”

Miller plans to start targeting often neglected demographics by boosting recruitment efforts across the nation. During the four years she will spend in this role, she hopes to make the reserve a place that offers something unique for everyone who wants to join.

“My goal is to get out to every population and let them understand the opportunities that are out there for them.”

However, she was also concerned that arbitrary budget caps might hamper her abilities to do that.

She added that she was worried that there is not enough money to perform all the reserve functions needed around the globe, and to provide adequate compensation for her airmen and women.

As that nation enters the final stages of election season, Miller said that the next Commander-in-Chief will need to work with Congress to ensure that Defense Department can provide sufficient funding long term.

But supposing that is an achievable goal, Miller added that she intends to continue to build out the reserves as a crucial part of the Air Force by seeking out the best talent both from those who transition out of the active component, and also the civilian population.

“The desire to help others is there,” she said. “What I am going to do in this particular area is to show an opportunity to serve. You can serve in your civilian capacity and then bring that same expertise into the military side. There’s many, many opportunities to participate at all levels.”