What happens when a White House staffer gets a photo snapped with a yellow sticky note showing the cellphone number... 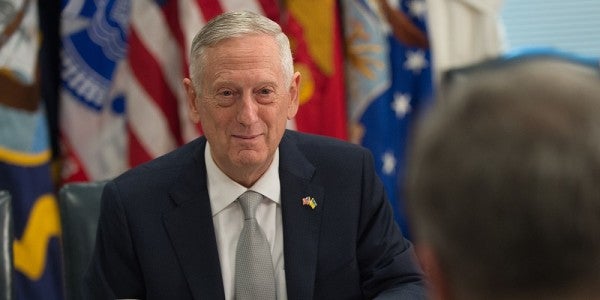 What happens when a White House staffer gets a photo snapped with a yellow sticky note showing the cellphone number of the Secretary of Defense, retired Marine Gen. James Mattis? First, everyone freaks out, understandably. Then, people start calling that phone number — and if you’re an enterprising journalist like Terry Fischer, a sophomore at Mercer Island High School, you manage to turn the administration’s PR blunder into an excellent interview with the military’s top dog.

Fischer and Jane Gormley, the editor-in-chief for the Mercer Island High School paper, The Islander, spoke with Mattis in June for a lengthy Q&A-style; interview, in which the retired general’s characteristic frankness was on full display. Here are five insights from Mattis’ interview with a high school student:

When it comes to war, you need to have an end-state in mind.

“If you look at the wars from probably Korea, Vietnam, Iraq, dare I say Afghanistan, every time we go into a war and we don’t figure out what the political end state is, we get into wars and we don’t know how to end them,” Mattis said. “Then you’ve got a real problem.”

Obama’s and Trump’s policies in the Middle East are not ‘dramatically different approaches.’

“I was a NATO officer and then a central command officer under President Obama and he was trying to reach out to the Arab people,” Mattis said. “He unfortunately didn’t always have the best advisors or he didn’t listen to his Secretary of State Hillary Clinton, so we missed some opportunities there. But I think also under the Obama administration, there was a more of an accelerated campaign against the terrorists than perhaps the Obama administration was willing to sustain. I think the two administrations are more variations on a theme than they are dramatically different approaches. “

You don’t beat an ideology with force, you do it with education.

“I don’t care for ideological people. It’s like those people just want to stop thinking,” Mattis said. “I think ideologies can be countered by showing people a better education and hope for the future by learning how to get along with one another. And for all of our problems in our country, we’re probably still the best example of that in the world.”

“The human condition, the aspirations, the dreams, the problems that are associated with being social animals, not being a hermit and living alone, but having to interact with others, whether it be your local school district, your community, your state, your county, your national, your international relations, history will show you not all the answers, but it’ll tell you a lot of the questions to ask and furthermore, it will show you how other people have dealt successfully or unsuccessfully with similar type issues.”

Why did Mattis take a call with a high school student?

“Whenever I can, I try to work with students who are doing research projects,” Mattis said. “I was at Stanford University for a little over three years after I got out of the Marines before I got surprised by this request I’d come back and be the secretary of defense. So, I’ve always tried to help students because I think we owe it to you young folks to pass on what we learned going down the road so that you can make your own mistakes, not the same ones we made.”