I’m A Veteran. Here’s Why I’m Voting For Gary Johnson

Editor’s note: To respect the voting process, the identities of those who responded to our prompt are being kept anonymous. … Continued 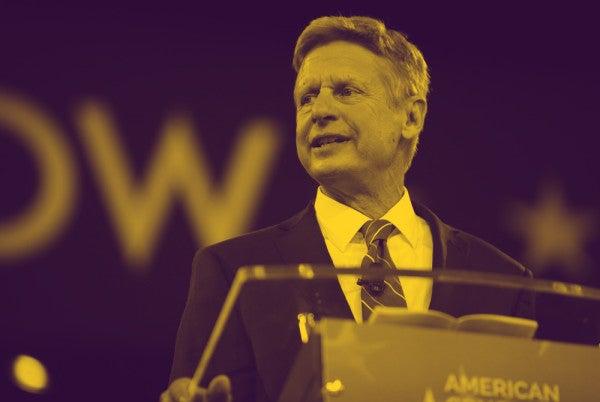 While Hillary Clinton and Donald Trump head the Democratic and Republican parties respectively, the Libertarian party has found hope in former New Mexico Gov. Gary Johnson. American businessman and author-turned politician, Johnson was also the Libertarian Party's nominee for president of the United States in the 2012 election. This year’s election has been epic, and we’ve only just entered the general — and this run made by a third party has sparked a debated about the two-party system that has controlled the country for decades.

Hundreds of Task & Purpose readers responded to the question: “Are you a veteran voting for Gary Johnson?” and here are 10 responses of those responses.

“He is the only logical choice. Trump is a fool and Hillary is a lying traitor. He is for freedom. Is that not what we fought for?”

“I took an oath in 1997 to defend and uphold the constitution, there was no expiration date. Johnson is the only candidate that has been clear on his constitutional view.”

“Hillary is a liar, cheat, and should be in jail. Donald apparently needs counselling, cause he is batshit crazy. The only SANE one in the group is Johnson!”

“He wants the government out of our personal lives. He wants to stop giving money to countries that hate us. Oh and he's neither the criminal Head of the Illuminati nor an attention-craving megalomaniac. So I mean there's that.”

“He's the only trustworthy candidate in the race who is serious about solving actual problems. The left and right are so bitterly partisan, they have no hope of actually compromising and passing reasonable legislation.”

“He has a proven track record as a governor, and he's neither an unhinged lunatic or a public servant with a very long history of questionable, unethical behavior.”

“I plan to vote for Gary again because the other two parties are exactly the damn same– more war, more surveillance, more spending.”

“I am voting for Johnson because voting for the lesser evil doesn't cut it anymore.”

“Because he's the only candidate who isn't a total scumbag? Because he is going to decrease the amount of Americans in prisons by wielding the power of the executive branch to make marijuana legality a reality? Because he won't follow the dance of military interventionism like our past two administrations, leading to my having fewer dead friends I agree with him on almost all his issues. I believe he is what this country needs moving forward. His track record. Common sense. There is an intellect there that isn't afraid to speak out against the sound bite political culture. A real shot at bringing this country closer than it’s been for decades.”