If there’s one thing you can always count on, it’s the humility and selflessness of James Mattis. Accepting a public … Continued 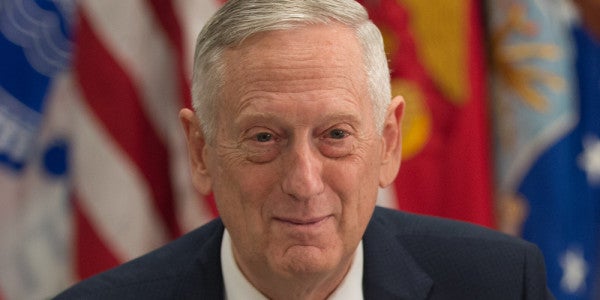 If there’s one thing you can always count on, it’s the humility and selflessness of James Mattis.

Accepting a public service award from Ohio State University's John Glenn College of Public Affairs at the National Press Club in Washington D.C. on June 20, the secretary of defense focused his conversation with Dean Trevor Brown not on his own history of public service, but on the school’s namesake.

“We all need role models in the world,” Mattis said of the late Glenn, whose service to the country included legendary stints as a Marine fighter pilot, the first American to orbit the Earth, and a U.S. senator from Ohio.

“We all need them, because they inspire us. They remind us that if we look at someone like this, we can always be better the next day. We all need a code and the role models we choose to remind us of what we can be in this country give us so many beautiful opportunities.”

Of course, not every American rises to the call of public service in the same way Glenn did, whose service to the U.S. spanned nearly 75 years, beginning with his enlistment in the military in 1942. But, Mattis said, the lesson of Glenn’s career isn’t the world-historical scale of your impact, passing groundbreaking legislation or risking your life to push the boundaries of human discovery — all you need to do to change the world is change a single person’s life.

“As we build this country in John Glenn's image, it's good to remember it doesn't matter where you do it, where you contribute,” Mattis said. “Your family, your parish, your school district, your county, your state, your country, the military, civil service, the intelligence agencies, wherever it is — it is a noble mission, and you have to remember that, especially when the going gets rough, and it's gotten a little rough here in our beautiful country.”

The military has a particular way of fostering this human level sense of duty and service, according to Mattis: giving junior officers maximum responsibility but limited authority, forcing them to rely on their team and building a sense of service to each other and society, far beyond their number.

“It means putting aside petty grievances,” Mattis said. “It means accepting the humanity of the people standing and working next to you, not characterizing them by a certain political stripe or another, rather by their humanity … by remembering we're more connected than we are separated by those issues that have to do with our vision for this country as we all work together to turn it over in as good a shape or better than we received it. That's our obligation to the next generation.”

Speaking to the assembled crowd, Glenn’s daughter Lynn relayed her late father’s affection for Mattis, “not just he's a Marine, but also because he's a tremendous patriot and has been a patriot like Dad for all his life. That's been his commitment.”

You can watch Mattis’ full remarks below: