When Florent Groberg speaks about the Medal of Honor and what he did to earn it, he does so with... 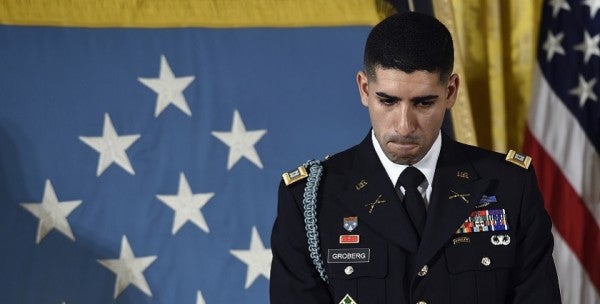 When Florent Groberg speaks about the Medal of Honor and what he did to earn it, he does so with specific people in mind: The friends he lost.

On Aug. 8, 2012 in Kunar province, Afghanistan, Groberg — then an Army captain — was assigned to the personal security detachment for the 4th Infantry Brigade Combat Team, 4th Infantry Division. While providing security for several senior leaders, Groberg noticed a man approaching the dismounted patrol. When the man turned and began backpedalling toward the American troops, Groberg saw a bulge on his chest under his clothing. It was a suicide vest.

Groberg made a split-second decision and with the help of his fellow soldier, Sgt. Andrew Mahoney rushed the man, pushing him away from his fellow patrol before throwing him to the ground. That’s when the bomb detonated. The blast tore into his left leg, leaving wounds that would lead to more than 30 surgeries.

While Groberg’s actions saved many, the loss of those four men stays with him to this day.

In an interview with Task & Purpose, Groberg spoke about the men who fell that day in Afghanistan, and what it means to live a life worthy of those who made the ultimate sacrifice.

The medal doesn’t represent a single individual, that’s an impossibility, it’s a symbol. A symbol of the United States, of our armed forces and our heroes who are out there and make the ultimate sacrifice to serve our country and our nation. So I am a courier of the medal, and when I speak, I have a responsibility to make sure I’m saying the right things and I’m not dishonoring what the medal represents. …The way I see it is with the medal, before that I was just a soldier and a wounded guy who served my country. Now I’m the same person, the soldier and wounded guy who served my country, but people want to hear me speak, and I want to go out there and make a difference. I want to earn the right to still be on this earth.

You know, four of my friends didn’t come home: Command Sgt Maj. Griffin, Maj. Gray, Maj. Kennedy, and Ragaei Abdelfattah. … Just over all the representation of the best of us in this nation, and they didn’t get to come home, and their families are living without a key member of their family, and they spend holidays without them, and I’m here. I had a guy who blew up at my feet and I got to live. I have to earn that right to still be here and I have to honor them.

Personally, the medal represents them for me and my job is simple, my mission is simple: To make sure that I do everything in my power to be a positive influence in my community, and that I represent them the right way. And then when I get to meet them again at some point, when they see me, they high-five me, give me a beer and say, you did alright, you earned the right to still be there.

Is It hard for you to speak publicly about your actions in Kunar province in 2012?

It’s hard. I mean prior to the medal I didn’t really talk about August 8, 2012, but since the medal I’ve probably talked about it a thousand times. So yeah, it’s obviously very difficult to talk about the worst day of your life every day, but the thing that allows me to cope with it is the fact that I’m now given the opportunity to talk about those four men and share their story and share their names, for their families, with thousands of Americans, thousands of people, not just Americans. Every time that I tell the story, I get to talk about them. I get to honor them and that’s how I cope with it.

Medal of Honor recipient retired U.S. Army Capt. Florent Groberg wears a bracelet as President Barack Obama speaks about his actions during combat operations in Afghanistan, Thursday, Nov. 12, 2015, during a ceremony in the East Room of the White House in Washington. The bracelet bears the names of his fellow soldiers who died in the attack for which he received the Medal of Honor.Associated Press photo by Susan Walsh

So, when you retell it, who are you retelling it for?

They all had kids. Kennedy just had twins. Gray has three kids. Griffin has two kids. Ragaei has two kids. You know they’re all married and had amazing family lives, people loved them. … When I speak about them, it’s beneficial for everyone, because we get to learn about those true heroes. Those ones who were willing to make the ultimate sacrifice and leave the comfort of home and family to go serve us and make sure that we get to sleep soundly at night, while they protect us. And yeah I was part of that group, but I got to come home, I get to speak to you on the phone, so I don’t consider myself a hero. I’m very picky about the word hero. To me, in a military setting heroes are the men and women who don’t come home or who are so injured that everyday is a struggle for them.

I have a specific question about when you made the decision to move on the man with the suicide vest. When you think about it now, what goes through your mind?

I’m actually very happy that I had the fortitude to react in that specific way because you never know. I don’t care who you are, you could be the toughest, baddest, meanest man in the world, or woman, but until you are put in that situation you do not know how you will react. I didn’t know if I would cower away, or freeze, or seek shelter, or if I would move toward the danger. I didn’t know to be honest with you, I always hoped I would move toward the danger, and until it happened, I had no idea what my reaction would be.

Now that you’re out of the Army do you miss being in an infantry unit?

I miss the guys, I miss being around them, all the crazy stuff that happens. The camaraderie the brotherhood, I miss it a lot. I miss combat, I miss the adrenaline rush, the responsibility. But there’s things I don’t miss, you know, there’s things of course you don’t miss.

But of course I miss it, absolutely.

Can you tell me more about you miss about being at war and in combat?

I miss the fact that I had guys to my left, my right, my front, and rear who I trusted with everything. I trusted them with my life and they trusted me with their lives and that’s the biggest honor you could receive. … Come on, that’s the greatest pressure you could ever put on a human being, but then again, it’s the biggest and greatest honor as well. I miss that, in a crazy way.