When I first joined the Army in 1990, there were no women at all in infantry units. I only remember … Continued 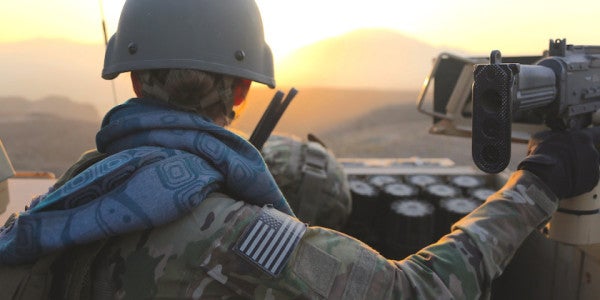 When I first joined the Army in 1990, there were no women at all in infantry units. I only remember seeing them around the brigade headquarters in the late 90s. But since 2001, I have served with, led, and been led by women.

As a drill sergeant, I trained women and as a forward support company first sergeant, I prepared them to deploy. I was deployed with them in combat in Southwest Baghdad in 2005. At the height of the insurgency, on some of the bloodiest terrain of the Operation Iraqi Freedom campaign, the women who were a part of that year and that battalion were warriors.

In 2005, in the “Triangle of Death” in southwest Baghdad, our small forward operating base was resupplied by the forward support company: Women and men who saw more combat and more improvised explosive devices than many others. Before it was a hot-bed political issue, these female soldiers were as professional and combat capable as any man I know. Making the twice-weekly run from the battalion forward operating base to the smaller outlying ones, the women who manned the machine guns and conducted the IED patrols were, in every way, as “hard” as their male counterparts. Our infantry battalion leadership made it clear that the women in our forward support company were as much a part of that infantry battalion as any of their line companies. Their early example set the conditions: either they could perform or they couldn’t. We needed everyone and the women in that company were as effective as they come.

When we needed air support, we all felt a lot more comfortable when callsign “Green Dragon 37” was on-station. Her voice over the radio let us know that if the situation got bad, she would be there. Her gender didn't matter, her competence did.

As gender integration becomes a reality, military leaders at every echelon need to lead the way in terms of accepting and embracing this directive. Among troops, feelings about women in combat arms range from excitement and belief that it will lead to enhanced capabilities, to anger at what some believe is a social engineering project that pushes things too far. Every leader’s first task is to figure out where you stand on this spectrum and then to understand how that might impact your ability to create the most effective unit possible. As leaders, you must first know where you want to go before you can lead others in any direction.

You then need to make sense — both organizationally and personally — of the cultural changes that will be required with the addition of women to previously closed occupations. You have to determine how those views might impact your ability to field the most well-trained, well-equipped, and well-led teams available. An approach that considers both the challenges and benefits of integration is best steered by military leaders who have a clear vision, are self-aware, and willing to make necessary adjustments.

Most importantly, if you cannot actively, openly, and with personal conviction support this decision, then you should consider giving up your leadership position. It will not do the profession any good if integration is supported publicly but condemned privately.

Good or bad, your unit will follow your direction both in order and attitude. While inevitable problems and challenges will occur, your ability to think through best solutions and to learn from the best practices of other units will ultimately impact success of each member of your unit, male and female.

There are tools available to assist you as you approach integration. Women in International Security, a private nonprofit organization, has developed a Combat Integration Handbook: A Leader’s Guide to Success, compiled by both women and men, most of whom have firsthand combat experience.

The discussion about gender integration should center on how to make it work, not on whether or not it was a good decision in the first place. The military is better with women serving in every position. In all positions. Units both small and large will become more strategically competent and locally effective. Leadership knows it and I know it, too.