The Military Has A Toxic Leadership Problem

Recently, the term “toxic leadership” has broken into mainstream culture. Where it used to mainly occupy wardrooms, ready rooms, and... 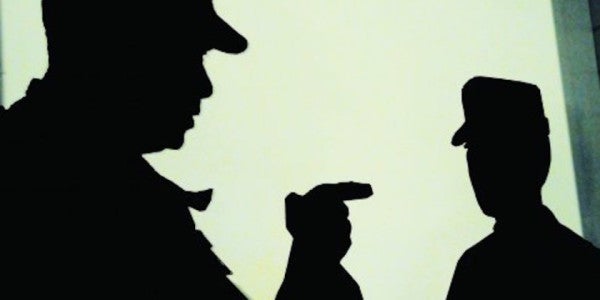 Recently, the term “toxic leadership” has broken into mainstream culture. Where it used to mainly occupy wardrooms, ready rooms, and professional journals, it’s now entered the lexicon of pop psychology and management consultants. The military, to its credit, has devoted much time and energy to the study of leadership, probably much more than the civilian world. It has been trying to address the toxic leadership problem for years, with little success.

The problem the military faces is that it seems to be stuck relieving commanders after they fail, instead of figuring out how those people got to be in charge in the first place. Way too often, there’s just a high–profilereliefofsomekind. For example, Lt. Col. Armando Gonzalez was relieved of command of Marine Wing Support Squadron 371 “after an investigation determined he had created a toxic work environment and allegedly made racist, sexist and other unacceptable comments about personnel who worked for him,” Marine Corps Times reported in November 2016. His firing ended his reign of toxicity, but how did he did so far in his career in the first place? Like this and other cases, the toxic leader is gone, and the service goes on thinking the problem has been solved. Until the next one. To end this cycle, the military has to start fixing the problem before they become commanding officers, not after.

Why do we see cases of commanders so immature that they throw things during meetings or put master chiefs in “time outs” like children? Every commander has spent years doing what the institution judged as the right things — completing key assignments, going to the right schools, and getting good evaluations the whole way. Were those leaders holding those impulses inside for nearly 20 years as they climbed the ladder, just waiting to take a unit’s colors, whereupon they could finally start assaulting their subordinates?

Perhaps the problem stems from a lax command selection process. Selection for command is first a product of the promotion rates for O-2 to O-5. An officer has to successfully pass through four promotion boards of increasing difficulty. O-5s are in the top third of their original contemporaries, purely by virtue of their promotion boards. Many more of those officers’ potential competitors self-attrite for a variety of reasons and get out along the way.

Then, the services select the best of those to slate the various commands. At least according to the standards the military has set for them, those selected for command are an extremely elite group. After another round of culling for O-6 command, doubly so. If the system is working as advertised, there shouldn’t be any toxic leaders, or at least so few that they are the stuff of legend, not semi-regular characters in military life. That they seem to exist in any numbers means that the system isn’t working when it comes to selecting qualities desired in leaders.

Just being incompetent or ineffective doesn’t make a leader toxic. While a leader with those traits can definitely be difficult to serve under, a competent supporting staff can mask a commanding officer technical incompetence.

Simultaneously, narcissism, self-centeredness, and cruelty make a poor leader, but not necessarily an ineffective one. In fact, being self-centered can be an advantage in many ways. It helps with self-confidence, which is certainly advantageous. Moreover, it enables one to use other people with neither conscience nor regret. This form of solipsism is sometimes a military superpower. Look no further than someone such as Gen. George Patton. Whether you call it self-confidence or narcissism, Patton’s attitude defined his command, both in its highs, such as beating Montgomery to Messina, and its lows, such as slapping a hospitalized soldier.

But it’s the combination of selfishness and incompetence that makes a toxic leader. And that’s why it’s so hard to screen out. Selfishness by itself actually helps many leaders ascend the ladder. As long as they’re competent, they may be demanding commanders, but bearable, because their units are successful. Eventually, though, a toxic leader reaches a level beyond his capability. Like a drowning victim, he flails for something to grab on in order to keep afloat. In this case, it’s his subordinates. A drowning selfish leader will climb on top of his followers to keep his head above water. Eventually that strategy fails, and that’s when he’s finally relieved.

The military can certainly be more proactive in ensuring the competence of its leaders. That’s half of the problem. The Royal Navy’s Perisher course is a good example of a way to root out incompetent commanders. In order to be eligible for submarine command, their skippers must graduate a demanding four-month tactical syllabus culminating in several multi-ship exercises. The attrition rate approaches 50%. Getting rid of incompetent people doesn’t require much effort, just the will to do so.

But eliminating selfish leaders is much harder. That’s not black and white. There is a place for things like “360-degree evaluations,” wherein leaders are evaluated by the led, but even the best of those tools will always have a whiff of popularity contest about them. While they are great teaching tools to give constructive criticism, they are difficult to integrate into evaluation systems, which need to be as objective as possible. Their best use is as an enhanced version of a command climate survey, alerting senior leaders to take a harder look at a potentially toxic subordinate commander.

Addressing selfishness among officers is a tough order (many enlisted might say an impossible one), but is the key to eliminating toxic leadership. As much as the military needs a magic wand to fix this, there is no such thing. It will be a long, tough slog.

It means looking at the culture from the day a potential officer joins the military through top level school and tweaking it to reward selflessness. One of the biggest differences between any of the officer candidates schools and enlisted recruit training is that boot camp is about building a unit and OCS is almost purely based on individual success or failure. While maintaining the screening function through attrition at OCS is important, the standard of excellence needs to be based more on which candidates are successful in teams.

It further means revising entrance requirements for officers to reflect emotional intelligence. It means making competitions among teams, not between individuals, the focus of formal training schools. It means de-emphasizing “honor graduate” of whatever course, and doubly emphasizing honor platoon, squad, or even study group. It may take a generation to make a difference, but it’s the only way to address this particular lack of character.

“Inspect what you expect.” The military inspects and grades officers based on individual effort, yet it expects people to succeed as teams. No wonder results don’t always match expectations.