Military Officers Have A Wishlist For The Next President

As military leadership prepares for the proverbial changing of the guard — the election of a new commander-in-chief, senators, and … Continued 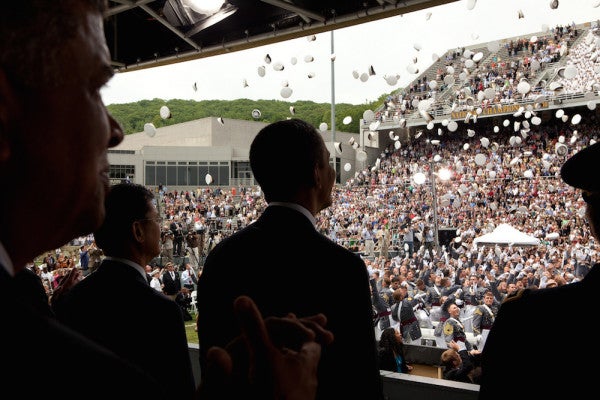 As military leadership prepares for the proverbial changing of the guard — the election of a new commander-in-chief, senators, and congressional members — its officers have certain qualities that they hope those seeking government offices will embody.

Many of the men and women who choose to become officers pledge their entire careers to military service. And so Task & Purpose reached out to the Military Officers Association of America, the largest association for military officers across the country, to find out what they expect from their civilian counterparts — those that will make decisions that have can a lasting impact on the armed forces.

We spoke with MOAA’s vice president of government affairs and Air Force veteran Steve Strobridge to find out exactly what characteristics officers look for when voting for a commander-in-chief, and what their concerns are over the next election cycle.

What are the most concerning issues facing the military over the next four to eight years?

Readiness. Over time, we’ve tended to have some kind of crisis, like 9/11, and you build up all the forces, and then Congress thinks that’s passed, and then the public wants a peace dividend. So you get into a budget crunch, then you keep getting these yo-yo kinds of circumstances. I think we would rather have some kind of baseline level, and not have some arbitrary budget limit — like sequestration. It’s going to come back with a vengeance next year, and when you have this kind of political divide, it’s very hard to get consensus on how much of a defense budget to put out there.

In terms of the next commander-in-chief, what qualities do military officers look for?

Military officers are concerned with all the normal kinds of things: integrity, coolness under fire. And you know, you can probably find things in both candidates that people will like, and not like, compared to those standards. It’s hard to get into that without seeming to lean one way or the other, but I think it’s the standard leadership qualities that most Americans want.

What about politicians who use service members to garner votes or push an agenda?

We believe in civilian control of the military, and no matter who is president, you owe allegiance to the office. I think our view is that when you’re in office, you have our public trust. But once you are retired, you’re just like anyone else. You’ve got the same First Amendment rights as anyone else. There’s no problem with endorsement. Those are the personal freedoms that we stand for.

What advice would you give to a candidate looking to get officers’ votes?

I think one key thing is to be sensitive to the difference between veterans and career service members. There tends to be a lumping together of those people. They’re focused on the VA. But people are forgetting those who served 30 years in uniform, and there seems to be a concerted campaign to cut their benefits, to reduce the rewards of career service. We’re doing everything we can to take care of veterans who served and got out, but we’re more than ready to penalize those that stayed for 30 years and sacrificed the most, quite frankly.

What is the biggest threat facing the military today?

The biggest concern is making sure the country is prepared, no matter what, to have a military that is prepared to handle any threat. Nobody was expecting on Sept. 10, 2001, that we would be at war for a decade and a half, and I think people can get complacent. I think that’s a significant concern to military officers.

And what are your thoughts on Veterans Affairs issues?

We have some obvious problems. No matter who is in charge, it takes time to make those changes. We think the current secretary at least has some good efforts underway, but it’s almost like the minute someone takes over, the next day somebody is calling for them to be fired. These big things can’t be fixed overnight.