Recently, “difficult conversations” was the main topic in not one but two of my business school classes. When you think... 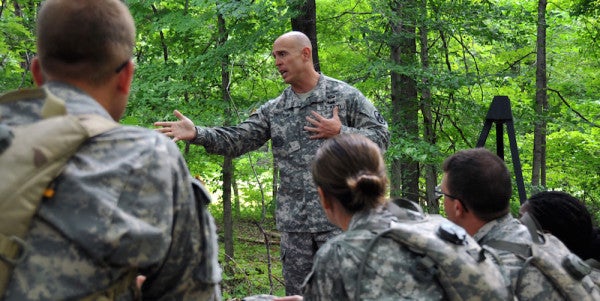 Recently, “difficult conversations” was the main topic in not one but two of my business school classes. When you think about an MBA in general management, you probably think about finance, operations, strategy, and many of the leadership skills that we develop in the military. You probably wouldn’t think that difficult conversations would make the topic list. Yet these two classes were possibly the most meaningful that I’ve had during graduate school.

If we shift our mindset from one of telling to one of learning, difficult conversations become much easier. They go from dreaded confrontation to a chance to understand and gain perspective. They’re more likely to help us manage problems going forward. And, perhaps most importantly, they become opportunities to connect with others.

There are plenty of difficult conversations that young leaders face. As an Army officer, I can remember my first interactions with my platoon’s noncommissioned officers, senior pilots, and seasoned crew chiefs. Here I was, the new kid on the block, and I was supposedly “in charge” of a group of soldiers who had just spent the last few years deploying, forming bonds, and gaining priceless experience along the way. Something as simple as initial counseling with my platoon sergeant or senior instructor pilot seemed utterly backward. I wanted to set the right tone and capture whatever credibility I could, but shouldn’t they have been counseling me? How was I to navigate this awkward interaction as a 23 year-old with zero experience?

Or flash forward a few years. Now I’m getting ready to submit awards for my company’s soldiers after their year-long deployment. I spend countless hours crafting narratives to capture each person in my company’s contributions throughout the deployment. Between missions, briefs, and the other command obstacles that usually accompany a deployment, I submit the awards to our personnel officer, confident that they’ll pass the scrutiny of any editor. When I return from my flight later that night, I see the awards stacked on my desk, “red inked” for debatable grammar errors that I can’t imagine the final approval authority would notice. My blood boils as I slam on the adjutant’s office door, demanding an explanation. Was my anger-filled approach really the most constructive way to handle this situation?

The list goes on. I remember telling my first sergeant to give me a little time so I could emotionally prepare myself before I delivered my first Article 15. Or my apprehension when I pulled one of my talented aviator’s pilot in command orders. Or disagreeing with my boss’s decision. Or giving a soldier tough feedback.

We’re not being honest with ourselves if we don’t acknowledge the emotions attached to these types of conversations. Anxiety, fear, dread, anger, self-doubt. Should I even have this conversation? What will they think of me after this conversation? I don’t think I’m the only one who’s felt the emotional cloud that often surrounds and impacts some of these tough conversations that we have as leaders. So the question is, how can we get better at having difficult conversations?

In their New York Times bestseller, “Difficult Conversations: How to Discuss What Matters Most,” Douglas Stone, Bruce Patton, and Sheila Heen provide an incredibly enlightening framework that helps answer this question. The main idea is to shift our mindset from having a difficult conversation to having a learning conversation. In business school class, we did a really simple exercise to drive home this point. We role-played various scenarios of difficult conversations with classmates. Afterward, the professor asked how we approached the exercise. Did we mostly make statements or mostly ask questions? I mostly made statements in my simulated confrontation. This was the wrong approach.

If we’re mostly making statements, we’re not listening, understanding, or acknowledging the other person. We’re not appreciating their feelings and point of view or opening the door to share our own. Focusing on statements makes the conversation much more difficult; focusing on questions makes the conservation much more about learning and sharing. Stone, Patton, and Heen capture the essence of this shift in mindset: “Instead of wanting to persuade and get your way, you want to understand what has happened from the other person’s point of view, explain your point of view, share and understand feelings, and work together to figure out a way to manage the problem going forward.” Think about how much more fruitful hard conversations become if we shift our mindsets as leaders.

As the new kid on the block, why couldn’t my initial counseling have been more about asking questions, understanding expectations, and learning about my platoon’s experiences and leadership perspectives? As a frustrated award writer, I would probably increase my effectiveness as a commander if I better understood a staff officer’s thinking behind the red ink. And when I think back to difficult conversations with soldiers, the true nuggets of understanding usually came from the questions I asked. A soldier has financial issues, struggles in his marriage, a sick child at home. A soldier thinks I’m micromanaging when I’m around and feels like if I stepped back, she could really shine in her role. None of these realizations would happen without the right mindset going into the conversation.

Something else happens when we have a learning mindset. We connect. And as a leader, connection is an incredibly powerful tool. Daniel Goleman, Richard Boyatzis, and Annie McKee discuss this power of connection in their bestseller “Primal Leadership: Learning to Lead with Emotional Intelligence.” When we connect with others, we connect our emotional center. Unlike most of our physiological systems, our emotional center, known as our limbic system, retains an open-loop characteristic. A closed-loop system manages and self-regulates itself; an open-loop system depends on external stimuli. A satisfied limbic system creates emotional stability, and with emotional stability comes increased health, increased cognitive clarity, and maximized performance. A concerted effort to learn about our subordinates helps satisfy the emotional needs that can directly impact performance. Asking questions matters.

Connecting also motivates; it drives our subordinates toward accomplishing a shared goal. In a recent Stanford University study, researchers posited that a “mere sense of social connectedness” can cause people “to adopt the interests and goals of others” as their own. In other words, when participants felt a social connection with another person — even small connectivity — the participant tended to inherit the goal of that person. If leaders take time to connect with their subordinates, their subordinates will subconsciously gravitate toward the leader’s goal. Connecting goes hand-in-hand with creating and realizing a shared vision.

While connecting satisfies emotional needs and creates a shared sense of purpose, it can also change the way we perceive our surroundings. In a 2008 study in the Journal of Experimental Social Psychology, a team of researchers asked participants to perceive the slant of a hill in front of them. Participants accompanied by a friend or who thought of a friend perceived a less steep hill compared to those without a friend or those who thought of a neutral person. We can postulate the possible implications of this study as they relate to our leadership style. As we empower subordinates to solve tough problems, we can minimize perceived obstacles by taking time to connect with those we lead. We can, quite literally, make mountains into hills and give our subordinates confidence to conquer tough tasks.

A brigade commander once told me that “leadership is all about relationships.” With his quote in mind, I’m surprised that it took me this long to read the Difficult Conversations book and study such a basic component of leadership and relationships. Imagine how much more constructive my tough conversations could have been if I would have studied and prepared for them more thoroughly. Maybe it’s time that we add a new topic to our leadership development training. As a leader, learning how to shift toward a learning conversation is probably more valuable than memorizing battlefield symbols or the maximum airspeed of an airplane. The armed forces should make an effort to develop better conversationalists, and cultivate young leaders who are eager to learn, grow, and connect with their subordinates.