No matter how much time you spend in the U.S. armed forces, the impulse to serve never fully goes away. … Continued 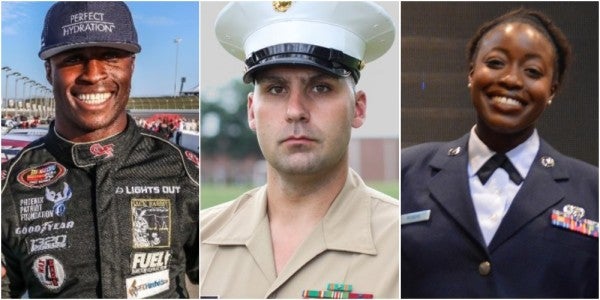 No matter how much time you spend in the U.S. armed forces, the impulse to serve never fully goes away. Service members often find new ways to serve their communities after they separate, from volunteer work to running for office, but many embody the spirit of service when the most extreme circumstances call them to action. Often, those who answer the call aren’t just good Samaritans — they’re total badasses who run toward danger and never look back.

Here’s a survey of hardcore service members and veterans who embody service to their communities and American society even after they leave the military.

If you moonlight as a NASCAR driver, chances are you spend most of your time avoiding flaming wrecks on the side of the road. But if you’re a Navy Reserve officer, then to hell with that — a burning car means it’s time to do your duty.

On June 24, Jesse Iwuji was on his way home from work as a NASCAR driver when he saw the stranded vehicle and a family of four, including two small children, on the side of a highway. A small fire was burning underneath as fluid dripped from the van’s undercarriage.

“I saw that a pretty bad situation was about to erupt pretty quick,” Iwuji told Task & Purpose. “We’re always taught: ship, shipmate, self.”

After pulling onto the shoulder of the road, Iwuji’s training in his other job as a lieutenant and surface warfare officer in the Navy Reserves, came into play. After a failed attempt to push the vehicle away from the fire underneath, he ushered the family to a safe distance before the car erupted in flames.

“I’ve noticed any time there’s ever any situation on the side of the road that could be a dangerous situation, I don’t even have to think twice,” Iwuji said. “I just stop and see what I can do to help. I just try to do my part.

Rubbernecking: not even once.

Sometimes dodging enemy fire downrange in Iraq can actually have some applications in the civilian world — especially when combined with the only acceptable circumstances for auto theft.

When gunfire rained down on Las Vegas’ Route 91 Harvest festival late in the evening of Oct. 1, 2017, Marine Corps veteran Taylor Winston sprang into action. Spotting a nearby truck with the keys still in the ignition, he transformed the truck into an ad hoc ambulance and ferried as many as two dozen wounded attendees to the hospital during two trips, according to the Daily Beast.

Winston, an Iraq War vet, loaded the wounded into the bed of the truck and the back seat, directing passengers to triage the gunshot victims and speeding toward Desert Springs Hospital Medical Center “before they bled out,” he told the Daily Beast.

“We started grabbing people and loading them in the truck,” he told Stars and Stripes. “Some were in critical condition. We took a full load to the hospital and then came back for more.”

The soldier who saved lives during a deadly train derailment

Cars from an Amtrak train lay spilled onto Interstate 5 below alongside smashed vehicles as some train cars remain on the tracks above Monday, Dec. 18, 2017, in DuPont, Wash.Photo via Associated Press

There’s no better excuse for being late than “Sorry, I was saving lives during a train crash.”

In December 2017, a brand-new Amtrak train endured a horrific accident during its inaugural trip from Seattle to Portland, Oregon: Rocketing along a stretch of track outside Tacoma at nearly 50 mph over the designated speed limit, the powerful locomotive derailed over an interstate highway, plunging from an overpass across multiple traffic lanes and taking its passenger cars with it.

Second Lt. Robert McCoy, an Army medic assigned to the 56th Multifunctional Medical Battalion, 62nd Medical Brigade at Joint Base Lewis-McChord, was driving along the highway when he saw the train fall from the overpass. After stopping his truck, the soldier grabbed a CPR mask and tourniquet and rushed to aid survivors, even evacuating one of the train cars as it hung suspended precariously over the highway.

The airman who saved a family from a burning building

Not all heroes wear capes — some of them just wear name tapes.

In April 2016, a devastating fire broke out in a South Korean residential building where Air Force Staff Sgt. Cierra Rogers, a 731st Air Mobility Squadron administrative assistant, was visiting a local residing family — a 30-year-old mother from Nigeria and her three children, ages 1, 3 and 4.

According to the Associated Press, Rogers smelled smoke and soon realized that she and the family were trapped. She kicked out a window in order to allow access to the patio, and then tried to climb down the 37-foot building with only a thin wire to find help. The rescue team of about 10 people then caught the family of four with a large blanket as they jumped from the fourth story.

“I just did what I thought was right,” Rogers said in an interview with Fox News. “If we’d stayed in that building without me doing anything, we would have died.”

The Vietnam veteran who stopped a crime spree

Sometimes, a good guy with a gun actually comes through.

When two young men attempted to rob two people sitting in a car in front of a residence in St. Louis in February 2017, the driver — a 70-year-old Vietnam veteran — pulled his own firearm in self-defense.

“My guess is that they were shocked that this gentleman was ready to take care of them, when they thought they were taking care of him,” a state’s attorney said at the time. “Even though they had the jump on him, he was clearly better prepared than they were.”

“Self-defense is an inalienable right in a free society, and the right to keep and bear arms is enshrined in the Second Amendment,” the official added. “He was just an armed citizen who was able to defend himself and his friend, and stopped … a crime spree by these individuals.”

Veterans know how to look out for each other, even if they don’t know it at the time

On July 31, 2017, Marine Staff Sgt. Dustin Gill and his wife Cynthia were driving along Interstate 26, headed for their honeymoon cruise, when the newlyweds hit heavy traffic stemming from a motorcycle accident.

As he approached the accident, Gill saw that the man’s leg was severed below the knee and immediately applied the skills he learned during two deployments to Afghanistan to save the man’s life. Using a tire iron and a belt from a nearby bystander, Gill fashioned a makeshift tourniquet and directed onlookers to call 911 while he worked to clear traffic, directing cars out of the way to make space for a helicopter to land — essentially turning the side of the highway into an ad hoc landing zone.