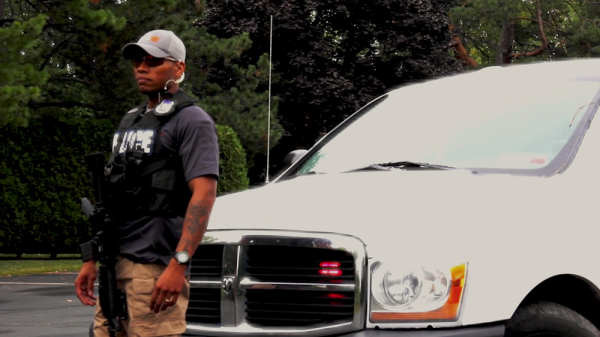 There have been 399 mass shootings in 2016 alone. And while no one ever expects to be one of the casualties listed off in the harrowing evening news reports that follow these tragic events, it happens to people across the country almost every day. It may sound incredibly morbid, but in order to avoid becoming a statistic in an attack, it helps to arm yourself with knowledge of how to survive a shooting.

And Army veteran Zee Kitonyi has made sharing that knowledge this his life’s work.

After separating from a 13-year Army career, with a deployment performing counterterrorism operations in Iraq in 2004 and 2005 under his belt, 34-year-old Kitonyi began working as a police officer. Now, he assists with the security planning process and emergency management for the city of Albany, New York. Because of his background, he specializes in active-shooter-response planning.

“You can apply what you learned in the field, both tactically and conceptually,” Kitonyi told Task & Purpose in an interview. “It’s similar to what I did in Iraq.”

That particular deployment made Kitonyi allowed him to hone his skills in emergency planning, so he offered these eight expert tips for handling an active shooter.

In video below Zee Kitonyi talks about his anti-terrorism and law enforcement training during a Got Your 6 Storytellers events in New York City.

“To keep it simple, say to yourself, ‘If this happens, I'm going to do this,’” Kitonyi says.

He adds that you should never walk into a place you if you don’t know the way out, noting that every commercial building is required to have emergency exit plans displayed. Even though he suggests that it’s not worth it to be paranoid all the time, it’s important to be cognizant of where you are and how you can get out if you need.

“Take a minute of your time and glance at these plans.”

“Don’t follow a fleeing group without being sure,” Kitonyi advises. “Following a group running in a direction may be detrimental. How can we be sure they're running in the right direction? There's a 50/50 chance right or wrong direction. Let's keep that decision our own.”

“Have a heightened situational awareness during vulnerable times. Active shooters are looking to capitalize on target availability.”

While he doesn’t want anyone to be hypervigilant, Kitonyi notes that there are certain factors to consider when going out. Active shooters often choose to target large crowds on meaningful dates or at large-scale events. But instead of being afraid of going to say, your town fair, you should only really be wary if things appear out of the ordinary.

“We only need to pay closer attention to what looks out of place,” he says. “As cliché as it may sound … if you see something, say something.”

Don’t be a victim.

Though this may sound insensitive, it’s important. Kitonyi stresses that instead of succumbing to fear in the event of a shooting, you should be proactive in trying to escape or hunkering down and protecting yourself.

“Don’t focus on being a victim,” he says. “We are not helpless. Combat breathe and make a decision.”

He adds that the worst thing you can do is panic and let fear paralyze you.

This gets back to the point of mental scripting. You should always know where the exits are, and consider that when faced with no doors, windows can easily become secondary exits.

“Statistics show that those who flee are those who survive,” Kitonyi says. “If something appears threatening, don't stick around to see what is going to happen.”

“Most likely what we're hiding behind isn't ballistic,” he says.

Hiding often isn’t secure, and playing dead won’t stop a shooter from doubling back to finish the job. Kitonyi notes that hiding is hopeful but doesn’t typically pay off, especially if the shooter finds you.

“There is no negotiating with these people,” he says. “They're there to do one thing, and that's to hurt or kill people, as we learned from the Virginia Tech incident.”

If fleeing isn’t an option and a shooter is coming your way, the best thing to do is hunker down and make your location as secure as possible. Kitonyi says that if possible, you should lock the doors, and create barricades with any materials available.

He adds, “The most common question asked is lights on or light out?”

And there is no cookie-cutter choice. It really depends on the situation, and if you’re in a group, it also hinges on what you all agree is the best decision.

“There is no right or wrong answer as long as everyone is on the same page,” he says. “But if every room’s light is out and is on, or vice versa, where do you think the shooter's attention is going to be?”

“If avoiding the shooter isn't an option, and the shooter or shooters defeat barricade, left with one option: Fight,” he says.

One consideration, Kitonyi mentions, is that the shooter is human, too. If someone comes after you, you can make the choice to take your fear and adrenaline, channel it into aggression, and defend yourself.

“It is imminent that someone is going to get hurt, is it going to be or the shooter?” he asks, rhetorically.